I picked up the first book in Pippa DaCosta’s Messenger Chronicles, Shoot the Messenger, as a freebie on Amazon. I then borrowed book 2, 3, and 4 of the series (Game of Lies, Nightshade’s Touch, and Prince of Dreams) in audio through Hoopla. Lastly, I purchased an ecopy of book 5, Her Dark Legion.

I wrote a review when I finished Shoot the Messenger, but I simply flew through the rest of them all together. There’s no good way to go back and pick through the story for individual reviews. So, I just wrote one review to stand for them all.

But, if I’m honest, that works for me. I usually want to know how a series starts (is it worth picking up) and ends. Because if I like the beginning I’ll keep going, but like to know if it has an actual ending. The middle is….well, it’s the middle, isn’t it? 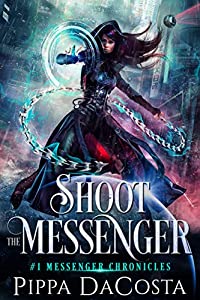 “Lies aren’t her only weapons against the fae…”

In the Halow system, one of Earth’s three sister star systems, tek and magic—humans and the fae—are at war.

Kesh Lasota is a ghost in the machine. Invisible to tek, she’s hired by the criminal underworld to carry illegal messages through the Halow system. But when one of those messages kills its recipient, Kesh finds herself on the run with a bounty on her head and a quick-witted marshal on her tail.

Proving her innocence should be straightforward—until a warfae steals the evidence she needs. The fae haven’t been seen in Halow in over a thousand years. And this one—a brutally efficient killer able to wield tek—should not exist. But neither should Kesh.

As Kesh’s carefully crafted lie of a life crumbles around her, she knows remaining invisible is no longer an option. To hunt the fae, to stop him from destroying a thousand-year-long fragile peace, she must resurrect the horrors of her past.

Kesh Lasota was a ghost. Now she’s back, and there’s only one thing she knows for certain. Nobody shoots the messenger and gets away with it.

A new space fantasy series where the guys are hot, the perils are many, and one rebel messenger holds the key to the survival of the human race.

Ha, you have to admire the audacity of this mash-up, it’s old-school, all powerful fae…in space! And to my complete surprise, it works. I truly enjoyed DaCosta’s “Paranormal Space Fantasy.” My enjoyment was helped along by the fact that I liked both Kesh and Kellee, and was intrigued by the possibility of Talen. I’ll definitely be continuing the series.

However, I also thought it suffered from plot-drift a bit. A twist to Kesh’s character appears toward the end of the book that doesn’t feel believable, since the reader was in HER head for the whole book. That she might have tricked the other characters was certainly conceivable, but how it’s supposed to have escaped the notice of the reader who was in her head is a huge question. Thus, if felt as if the author simply changed directions in the plot.

Regardless, I want more.

And here’s what I said about the rest of them.

Prior to this series, I’d read one Pippa DaCosta book and, while I didn’t dislike it, I wasn’t particularly impressed either. So, I was startled to dive into this series and want to stay for a while. I really enjoyed it. It’s not perfect, but it’s fun and everything wraps around itself and comes to a satisfying conclusion (something I feel like happens more and more rarely these days). I liked Kesh as a character. I loved Sota as a comedic side-kick and I appreciated that, even though this is a reverse harem, it isn’t drowning in sex. It strikes a nice balance. All in all, a true success for me.