I purchased a Supernatural Book Crate and a signed copy of Magic Bite, by Leia Stone and Lucía Ashta was one of the books included. 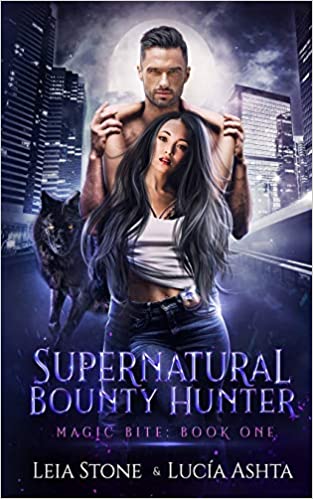 Evie Black and her demon imp partner, Cass, are two of the most fearsome supernatural bounty hunters on the West Coast. But when Evie’s beloved grandmother dies, her world shatters.

After finding the bottom of a bottle of tequila, Evie breaks the one rule she knows better than to ignore: Never hook up with a werewolf.

Especially when he’s the local alpha who, oh by the way, happens to be her gran’s sworn enemy.

Yeah, complicated doesn’t even begin to cover what happens next.

This review will contain spoilers. I want to discuss the difference between what the blurb sets the reader up to expect and what we are actually given and there isn’t a way to do that without revealing what actually happens.

It is unfortunate, but we have to accept that there are still expectations of women and female behavior in America (and the West in general) that are focused on being caring and maternal. The idea of motherhood is still held as the gold standard. While more woman than ever now enter arenas of physical strength, violence, and authority that were previously denied to them (with and without children), they are still considered transgressive to a certain degree.

So, when I’m promised a transgressive, kick-ass female character and instead handed a woman who gets herself knocked up in the first chapter, spends most of the book coming to terms with her impending motherhood, and being coddled and protected by a man, I feel very much as if a bait and switch has occurred. As if I have, instead, been handed the shining model of ‘womanhood’ that I sought explicitly to avoid.

Yes, that’s a bit of an exaggeration for the sake of making the point, but the point still stands. A female character can be a mother and still be the transgressive character I refer to. I mean look at Sarah Connor, or just maternal and still defy the cultural dictates of acceptably soft femininity. Look at Ripley (at least in the movies). But that’s not what Magic Bite: Supernatural Bounty Hunter does. It instead gives us the whole ‘fragile woman being protected by a man’ punchline (even as it claims to be giving us something else entirely).

And the thing is that this isn’t a bad book. It isn’t a bad story-line. (The writing and editing isn’t bad either.) But why would the authors choose to set the reader up to expect one sort of story and then give them another? Why not be honest about what is found inside…unless they’re painfully oblivious or actually trying to trick and trap one sort of reader into reading a whole different sort of story? Which is kind of how a lot of us feel about society in general and motherhood, as if society is trying to drag us onto that path no matter the underhanded means. So, having a book do this to us, feels like one more grasping, “but don’t you really want a baby” hand to slap away. It feels like yet another microaggression and impending insult to personal autonomy.

And we just won’t even go into the unlikelihood that a trained supernatural bounty hunter, who has had several supernatural boyfriends and sexual partners (and a supernatural doctor) wouldn’t have been told that human birth control wouldn’t work with werewolves, making the whole idea of an accidental pregnancy ridiculous. We’ll just let that stand.

All in all, Magic Bite is a prosaic but otherwise fine, middle of the road paranormal read (that ends on a cliffhanger just as the action finally starts). You’ll have seen all of these tropes before, but a lot of us read PNR because we enjoy them. So, I’m not put off by tropiness in and of itself. But it is 100% not what it promises on the packaging. 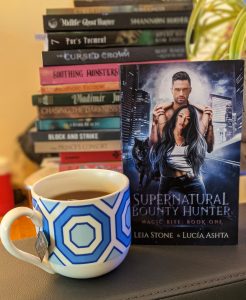