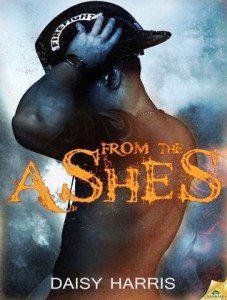 I picked up Daisy Harris‘ novel, From the Ashes from the Amazon free list. At the times of posting, it was still free.

Description from Goodreads:
When an accident burns down Jesse’s apartment, he’s left broke and homeless, with a giant dog and a college schedule he can’t afford to maintain. And no family who’s willing to take him in.Lucky for him, a sexy fireman offers him a place to stay. The drawback? The fireman’s big Latino family lives next door, and they don’t know their son is gay.Tomas’s parents made their way in America with hard work and by accepting help when it was offered, so he won’t let Jesse drop out of school just so he can afford a place to live. Besides, Jesse’s the perfect roommate—funny, sweet and breathtakingly cute. He climbs into Tomas’s bed and tugs at his heart. Until Jesse starts pushing for more.Their passion enflames their bodies but threatens to crush Tomas’s family. Tomas is willing to fight for Jesse, but after losing everything, Jesse isn’t sure he can bear to risk his one remaining possession—his heart.

Review:
I’m fairly torn about what I thought of this book. I really liked the characters. Tomas is pretty much everything a person could want in a lover. Yes, he has a few issues of his own, but any man who is so willing to put himself out there for the man he loves is alright in my book. And while Jesse comes across as young and naive, I also respected that he was hell bound and determined to stay independent. There were a lot of really sweet scenes. The whole, ‘you don’t have to be perfect’ thing made me sigh. There were also some cheesy ones, but nothings perfect.

But as much as I liked these aspects of the book, I also found it a little dull. There was very little angst. The two characters met, had an instant attraction, were forced by circumstances to choose to live together, and seamlessly fall in love. It was all just a little too easy.

But I also have this vague uneasy feeling about Tomas’ issue. I don’t want give too much of a spoiler, but Tomas has a problem respecting men he has sex with and what that means as a gay man. While I understand this wasn’t actually meant to be judgemental, rather a challenge for Tomas to overcome, it still made my skin crawl a little. Plus, he seemed to get over it fairly quickly in the end, all things considered.

The writing and editing were both fine and I’d be more than willing to pick up another of Harris’ books.