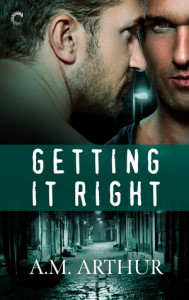 I received a copy of A. M. Arthur’s Getting it Right from Netgalley.

Description from Goodreads:
Detective Nathan Wolf might just be a junior detective, but he tackles every case with the passion that he lacks in his personal life. A series of failed relationships with women has left him still single at thirty-four—because he’s too scared to admit to his longtime crush on his best friend James.

Dr. James Taggert likes to keep his profession as a psychiatrist separate from his party-animal persona. Known around the gay clubs as Tag, he’s the guy who screws them, leaves them, and never looks back. But James’s drinking is getting heavier, and when bad memories from the past resurface, he’s close to becoming the worst version of himself.

After a drunken blackout ends in a hot and heavy make-out session with his very straight best friend, James has no memory of the steamy affair. But Nathan isn’t sorry for the kisses that James can’t remember. Nathan finally musters the courage to tell James how he really feels, but a life-altering event might force them apart before they can ever be together.

Review:
Well, that was a disappointment from page one…before that even. My first annoyance popped up in the author’s acknowledgements. It was here that it was mentioned thatGetting It Right (Restoration #1), despite being labeled a first in a series, is based on a character from Maybe This Time (Belonging, #2).

I dislike spinoffs because I’m never sure how integrated they are. Sure, this is a stand-alone book, but there are a lot of characters that are obviously from somewhere else and thus basically just dropped in on occasion. Here’s an example, “A small crowd of their shared friends had taken over the waiting room on Doug’s floor. Boxer and his latest boyfriend, Louis. Tori and her husband, Allen. Some of Doug’s co-workers from the store…” None of these characters had been mentioned before this point, there is obvious history here and it’s not from this book or really relevant to this book. This is the sort of thing I avoid.

What’s more, there’s a lot of exposition in the beginning, trying to catch the reader up on some of this stuff. First Elliot shows up, so we have to be told who he is and what his situation is like. Then the reveal and change of his situation has to be explained. But none of it is anything more than a detour from the main story.

But all of the above pales in comparison to my real issues with this book. First, it’s full of angst and ridiculous misunderstandings based on the fact that one of the men made an assumption or jumped to a conclusion and stormed off (or worse, one lied for no conceivable reason). So annoying. I don’t think I’ve ever read a book where this was a satisfying turn of events. It was even worse here because it felt like all these darned men did was talk, talk, talk. I’ll admit it was nice to see male characters breaking the ‘men don’t do emotions’ trope and discussing their feelings, but good lord did it get tiring.

But even that’s not my biggy. I’m going to discuss my big problem with this book as general advice to authors. Here it is: If you want to write a PSA, that’s great. The world could probably use a few good ones. But don’t dress it in the guise of fiction and sell it to me as a romance. That’s just bad form. What’s more, if you insist on doing this, at least choose one topic and stick with it, instead of trying to see how darned many you can squeeze into one book.

I’m not kidding, there were a ton of ‘issues’ being addressed here. Everything from the importance of talking out problems and getting a therapist for trauma, to PSTD, alcoholism, addiction, depression, cutting off those who are emotionally harmful to you, grief, regret, infidelity, the importance of condom use, secondary trauma, abuse, (both as a victim and as a recovered abuser), suicide, guilt, not taking responsibilities for others’ actions or choices (as in “It’s not your fault…”), the importance of acceptance, anorexia and cancer. I’m probably even forgetting some that I’ve forgotten between finishing the book and writing this review.

The problem is that it all felt extremely contrived. As if half the events were there more for the object lesson they allowed the author to force on the reader than for any sort of natural development of the plot. For example, at one point a character has a pre-cancerous mole removed and is giving up his job as a landscaper to avoid the sun. But it is one conversation with a side character and that’s it. It plays no role in the book whatsoever. It has no natural place. This is not fun to read!

All in all, though the writing was fine, I even liked the characters, this was a fail for me.