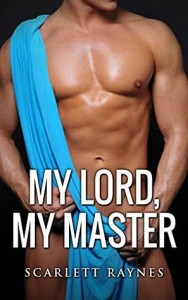 Author, Scarlett Raynes, sent me an e-copy of her novella, My Lord, My Master for review. I was super excited, because I’ve been really in to M/M lately and this is the first M/M I’ve received for review.

Description from Goodreads:
A King set on ruling with absolute power no matter how cruel or high the cost.

A fierce warrior who’s loyalty is tested when forced to confront his lust for an enemy.

A rebel, intent on claiming the throne and willing to destroy anything and everyone to get to it.

In an Ancient Kingdom, King Solveig rules with an iron fist. Those who are loyal, sacrifice their lives for the pleasure of his service. Those who are not- die. When his loyal right hand man, Gunnvor goes missing on a routine hunt, all hell breaks loose. A routine hunt for his King, turns into a nightmare as Gunnvor is captured. Forced to submit to his captor to survive, the line between lust and loyalty becomes painfully blurry.

Tired of his people being persecuted under the tyranny of the sitting king, Torhild is determined to conquer the land he believes is rightfully his. The unexpected intruder challenges not only his plans but also his self control.

Review:
OK, I’ll get this out of the way to start with. I might have been more pleased with this book than I was,  except that it is a totally cliffhanger with absolutely no resolution. I consider such books a waste of my time and tend to avoid authors I know make a habit of it. Especially considering it’s only 73 pages long. Surely the whole story could fit in a single novel if it’s being broken into chunks that small.

The editing could use a bit more attention. There were a few typo-type mistakes, the POVs jump around, and a new 1st person POV character is introduced at 80%, as is a supernatural element that hadn’t even been hinted at up until that point. The whole thing was just rushed, inelegant and abrupt. Oh, and the series title kind of gives away how the whole thing is likely to resolve itself.

So, if your just looking for something to fap/paff with and you’re into the dub-con, pick this up. But if you’re looking for a deeper read, you’ll probably be disappointed.