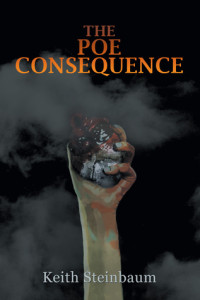 Author, Keith Steinbaum sent me a physical copy of his novel, The Poe Consequence.

Description from Goodreads:
In a section of Los Angeles near Dodger Stadium, two rival gangs rule the streets. For the Alvarado Street Diablos, it’s been a year since the murder of one of their closest members at the hands of their sworn enemy, the North Rampart Lobos. A drive-by killing in his honor is planned, but things go wrong and an innocent bystander is the victim. Several hours later the one who pulled the trigger suffers a horrifying death never before seen in its uniqueness. Many more such cases follow, all involving only these two gangs among the hundreds throughout the city. And each death occurs at the same time of day. The exact same time of day.

What can these two enemies do to survive against an unstoppable power intent on their mutual destruction? How is a gang-hating young boy’s attempt to save the life of a gang member tied into preventing a loved one’s soul from eternal damnation? What does a mysterious psychic’s prophecy conveyed earlier in New Orleans have to do with all of this?

Exploring both the hope and darkness that define our emotions, The Poe Consequence integrates social and ethnic divisions through acts of fate and supernatural horror for the reader to observe and imagine.

Review:
This was an interesting book. It held my attention. I thought the writing was perfectly passable and I only noticed a few editing mistakes (mostly missing spaces, oddly). So, a solid middle of the road read.

However, it did feel very much like an indie book, if you know what I mean. If you read a lot of indies you probably do and if you don’t I’m not sure how to explain it to you. They often have a certain feel to them. The stories often have a certain blunt, straightforwardness. Not necessarily inelegance, at least not in this case, but things move along in very plodding, determined ways. They are heavy on the tell instead of show. Emotions tend to be shallow or stated instead of experienced. Flashbacks are used a lot. Names and titles are often used too frequently. That’s especially apparent here where names are Face, Swat, King, and such. Stories often have moral themes or lessons that are heavy handed. ‘Please’ seems to be over used and people are often too polite. Conversations are often stilted or to abbreviated.

Similarly, but I think deserving of its own point; the bad guy is often a rapist. Even when there are numerous bad men in a book, if you want to find THE bad man look to see who is sexually abusing a woman. Apparently rape has become a flag for true evilness. It’s like a secret book code or something. But it’s so overused as to have become cliché and meaningless. As a package, all of this becomes recognizably indie. Not bad necessarily, but recognizable.

I thought Steinbaum did a nice job of showing Seth’s devastation and trouble adjusting. But the depiction of the Latino gangs, gang culture and language couldn’t have been a whiter middle class imitation of it if the author had set out to write a satire. It didn’t come across as natural or real at all. Further, I found the frequent use of Spanish distracting. It never seemed to blend into what should have been a natural mesh of the two languages. It felt gimmicky. There was a mild spiritual/religious undertone, but not enough to chafe.

All in all a decent read.