Today, I have a bit of a mystery. My aunt-in-law is visiting from England and she wanted to buy a second-hand suitcase for her return trip, something she could use to pack the things she bought here but wouldn’t spend enough on to feel bad about trashing once she got home. So, we found ourselves at Savers, where she found a fabulous mid-century suitcase that I personally think she should keep for all eternity and I picked up a stack of Alexis Morgan paperbacks. 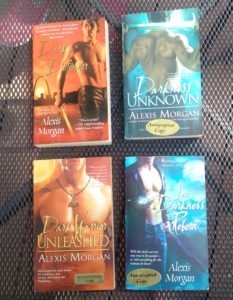 The first one to catch my attention was Dark Defender, because the Arch on the cover suggested it’s set in Saint Louis, where I happen to live. I still wasn’t paying a lot of attention yet, just browsing and thinking, “Oh something set in my own city could be cool.” Then, I found another and another. And they all had stickers declaring them autographed, which finally excited me. I love signed books.  I’d found four autographed books. Score!

Here’s where the mystery comes in. They’re all signed, “To Mom and Dad.”

I stood there in the book isle, staring at this and trying to think of a way these books (and probably more that I didn’t find, since they are scattered in two different series and I suspect ‘Mom and Dad’ had one of everything) ended up at the charity shop that didn’t originate in tragedy of some sort. Did they die and someone uncaringly or unknowingly clear the books away? Did Ms. Morgan do it herself? Was there a falling out between her and the parents? Did they just not care? Did she die and they couldn’t face her books?

Now, I don’t want to make light of what might be a bad time for someone (or not, could be totally prosaic), but once this thought patter set in I couldn’t put them back. I felt like they’d already been dishonored in some fashion and to put them back would be to compound the injury.

Ok, yes, I know that’s ridiculous, but when I’m paying $1.99 a book I can afford to be sentimental about them. I’m just hoping they turn out to be good. Anyone else get this way about random things?