I accepted a review copy of Accused, by M.N. Jolly from The Write Reads. However, I later was looking for an audio book to borrow from Hoopla—to listen to as I did chores—and when I saw Accused, I thought, I might as well just listen to it. So, I went the audio book route instead. I should probably note that this book was a bronze medal finalist in the 2021 BBNYA competition, since that’s the reason for the book tour. However, I wasn’t part of the judging. 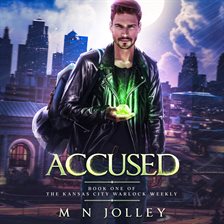 My name is Levi. I’m a journalist, I’m autistic, I’m bad at magic, and I swear I didn’t kill her.

Research for the paper usually falls into a few basic patterns. Someone in the city says there’s a troll under Buck O’Neil Bridge, or they’ll call just so a friendly ear will listen to them complain about a pixie infestation.

That sort of content carries me through slow news weeks. It’s rare that I uncover a murder.

Being framed for murder, though? That’s a first.

With the Wizard’s Council hunting me for a crime I didn’t commit, I’ve got no choice but to solve the murder and clear my name. If I don’t unravel this case, nobody will, and I’ll go down for it so hard I might never see the light of day again.

Some aspects of this book I really liked. I loved that Levi was on the autism spectrum and gay, but they’re just aspects of his character, same as being brunette or riding a motorcycle. There wasn’t a plot-related excuse for it or any particular drama about it. He was just allowed to be as he was. I also just plain like Levi as a character and thought the world interesting.

However, I was a little iffy with Ben—the magical equivalent of a Tinder date—being all-in for the danger and law breaking, after their first meeting with Levi. It just felt like there was a lot more trust there than there should have been. And I never quite grasped if the crime committed that led to the murder was business as usual or if anyone within the system was outraged over it. Not to mention if the perpetrators were actually caught and punished. And this left me feeling a little uncertain.

All in all, however, I liked a lot more than I didn’t and will happily read another Jolley book. (How dad-joke cheesy would it be to say it was a jolly good read?) Plus, Nikola Hamilton did a great job with the narration. 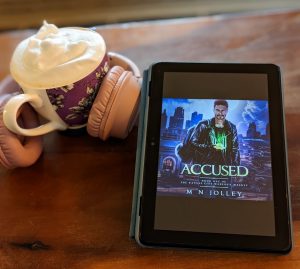