I found a fun thing today that I thought I’d try. Scrolling Twitter, I came across a post by Nell Iris in which she chronicled her month in 10 pictures. And I loved the idea.

It made me realize that I don’t put a lot of my life, outside of books, here on the blog, and made me wonder what I’d find if I looked back through a month of my own pictures. Like most people, my phone is full of candid shots I snap throughout the day. None of them were taken with an eye to publishing. (I didn’t even have the idea of this post yet.) But, seeing them might say a bit about me. So, here it goes.

What I found, unsurprisingly, was lots and lots of book pictures. I’m just gonna skip those. If you want to see them glance to the right or hop on over to either of my Instagram pages (@See_Sadie_Read or @Sadiesspotlight) they’ll all be there. Outside books, it was a month of cakes, nature, and dogs. And who can complain about that, really?

The month started with a picture of my almost finished new kitchen. I could rant frustratedly for an hour here, but I’ll hold myself back. Let’s just leave it at the project took significantly longer than projected and was full of complications. The last of which is that we can’t find anyone without a 3-4 MONTH wait to finish the plaster and paint! And please don’t even ask why the plaster wasn’t done before the cabinets went in. But the kitchen is complete otherwise. And we love our crazy blue countertops. 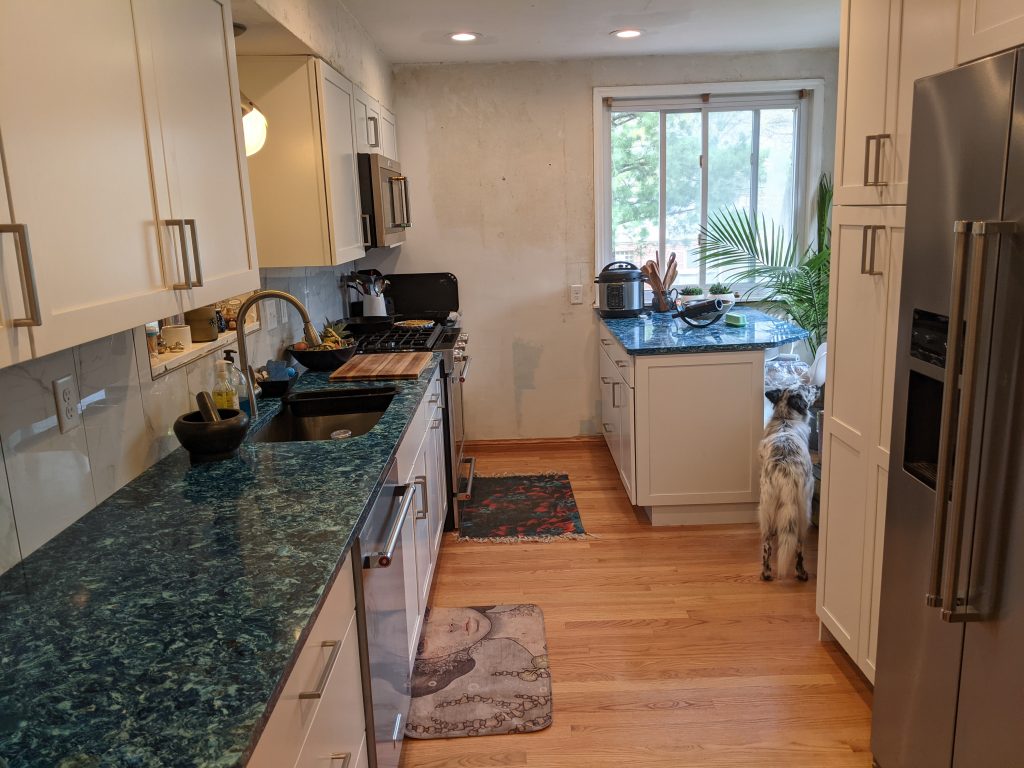 I took this picture April 9th, to send to my sister who lives out of state and therefore can’t just come over and see it.

We then spent the weekend out in woods. We have access to ~26 acres outside the city where we can go hike and bask in nature for a little while. 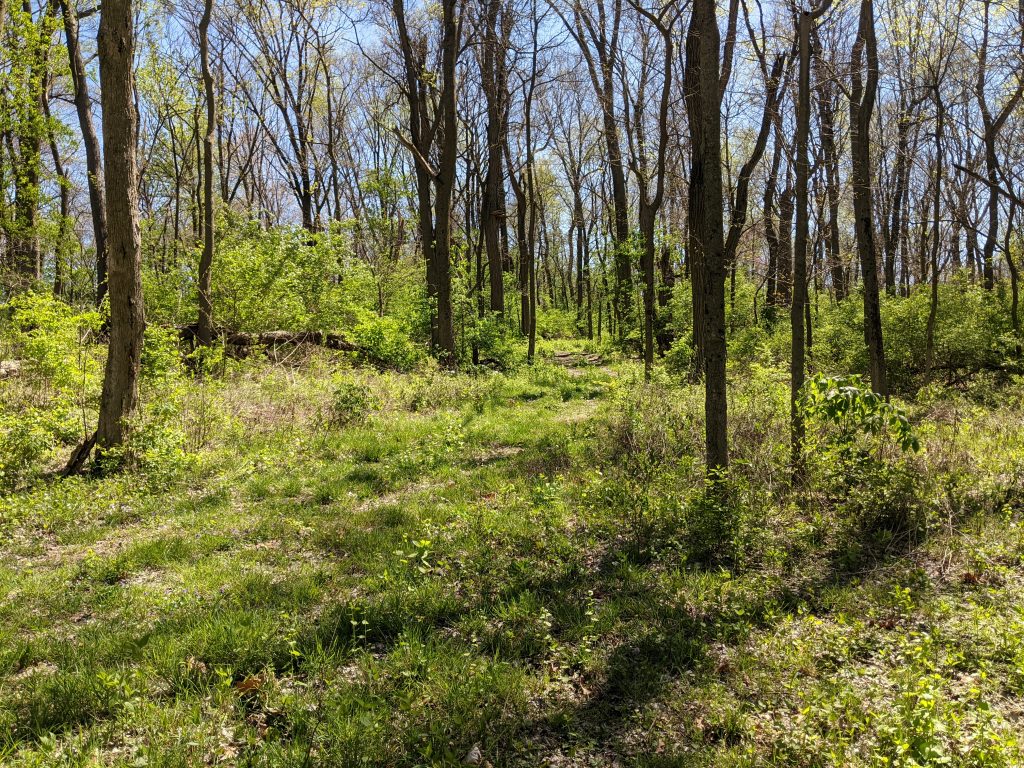 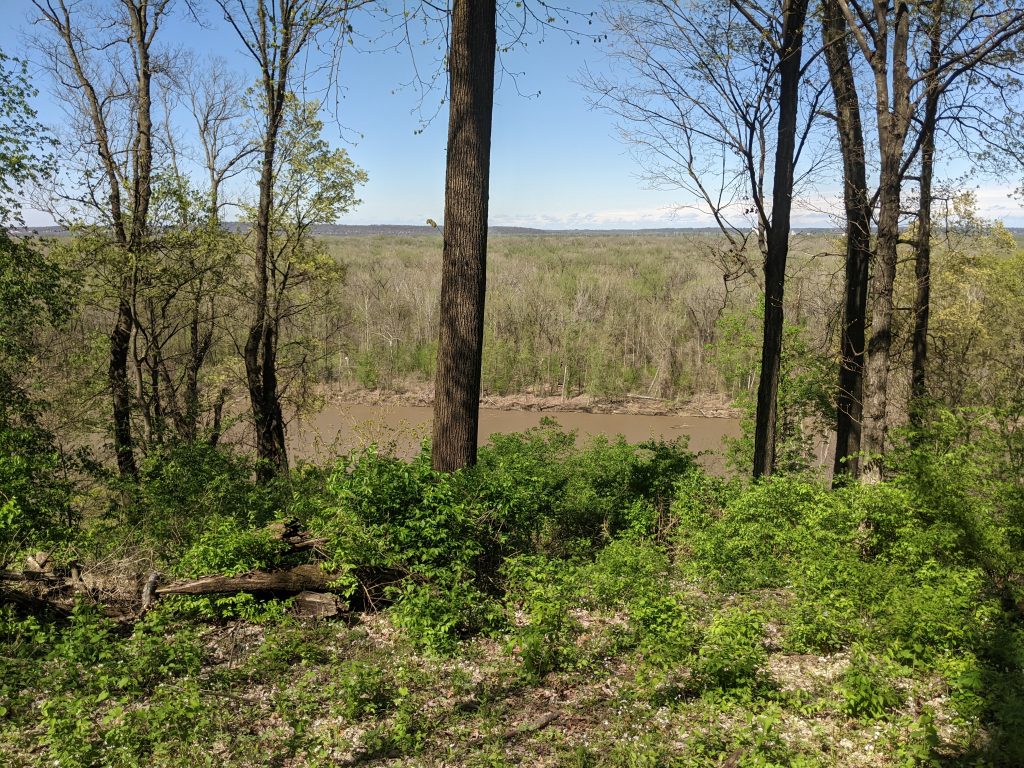 These pictures are taken in pretty close to the same spot, one facing north and the other south-ish. I’ve taken a picture over the bluff (toward Pelican Island Nature Preserve) pretty much every weekend for months. It’s amazing how much it changes from week to week. The whole forest, actually, not just the island. 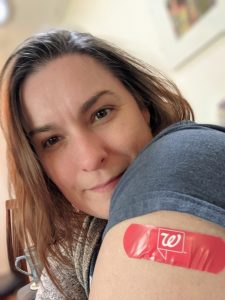 On the 16th I did something really exciting. I got my first Covid Vaccine shot. I was initially scheduled for the Johnson & Johnson single shot. But they ended up canceling the appointment and I rescheduled for the Moderna. So, I’m halfway there, folks.

And look, you even get a rare picture of me. I’d make excuses for my unfixed hair and lack of makeup. But I don’t wear makeup or do my hair (beyond a brush) normally. Honestly, this is the first time I’ve had hair that wasn’t in a pixie style in years. And only because it’s a covid-do. I’ve not been for a haircut since before quarantine started. So, this is me on any regular day.

We then spent the weekend out in the woods again, where the dogs (Motoko and Batou) were exceptionally cute. I got some great snaps of them and my husband. But I’ve cropped him out, since he wouldn’t appreciate being splashed on the internet. He’s shy that way. And you can also see, as always, there are books about, even in the woods.

I was also interested to see all the different kinds of wild flowers starting to peak out. I photographed some of them with the intent to google and see what they are. (Not good at identifying flowers, me.) But I never actually got around to it. Anyone have any ideas?

And then I ended the month with two unrelated cake encounters. My mother-in-law frequently sends boxes of treats to my children. It’s a thing. Included this last time was a Swizzels Parma Violets Cupcake Kit. This is not really something I want in my cupboard, but oh well. Eventually, I decided the solution was just to make the darned thing and then it would be gone. And since I have a friend who is getting back into cake decorating, and I’d just been talking to her about it, I decided to try my hand at actually decorating them, instead of just slabbing the icing on. The results were OK for a newbie, I think. 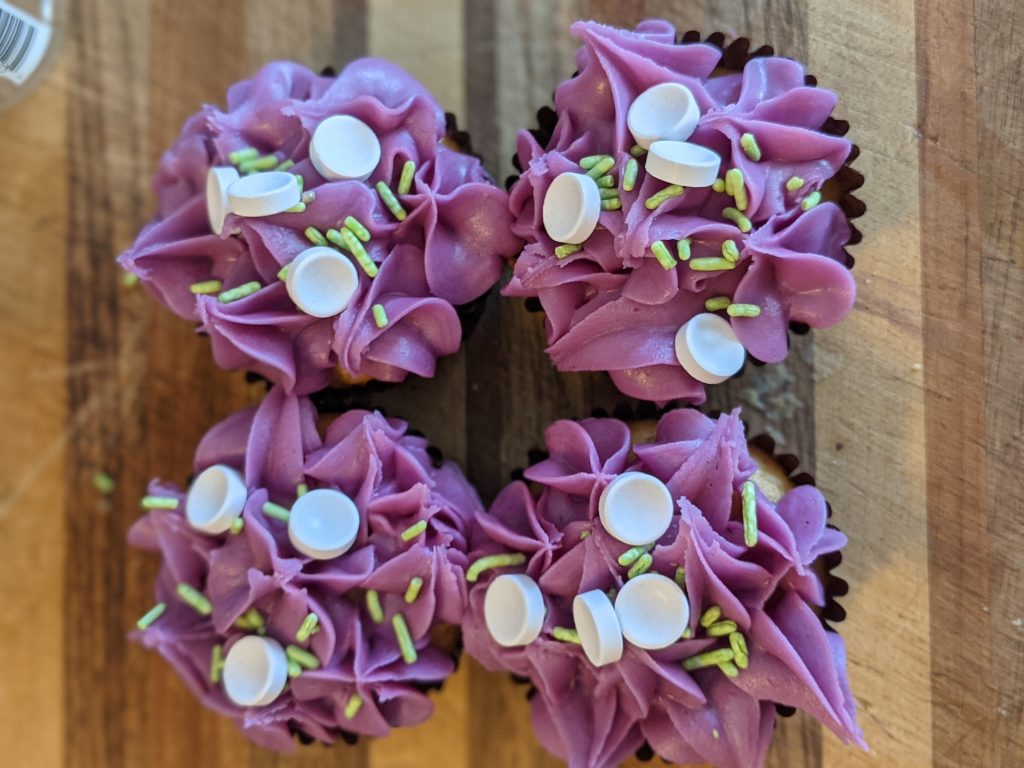 But I got really lucky a few days later when the same friend who’d prompted me to try my hand at decorating gave me a cake she’d decorated. You seeeeeee, one has to decorate a cake to practice. But one doesn’t actually need to be eating all the cakes they practice on. Lucky me! 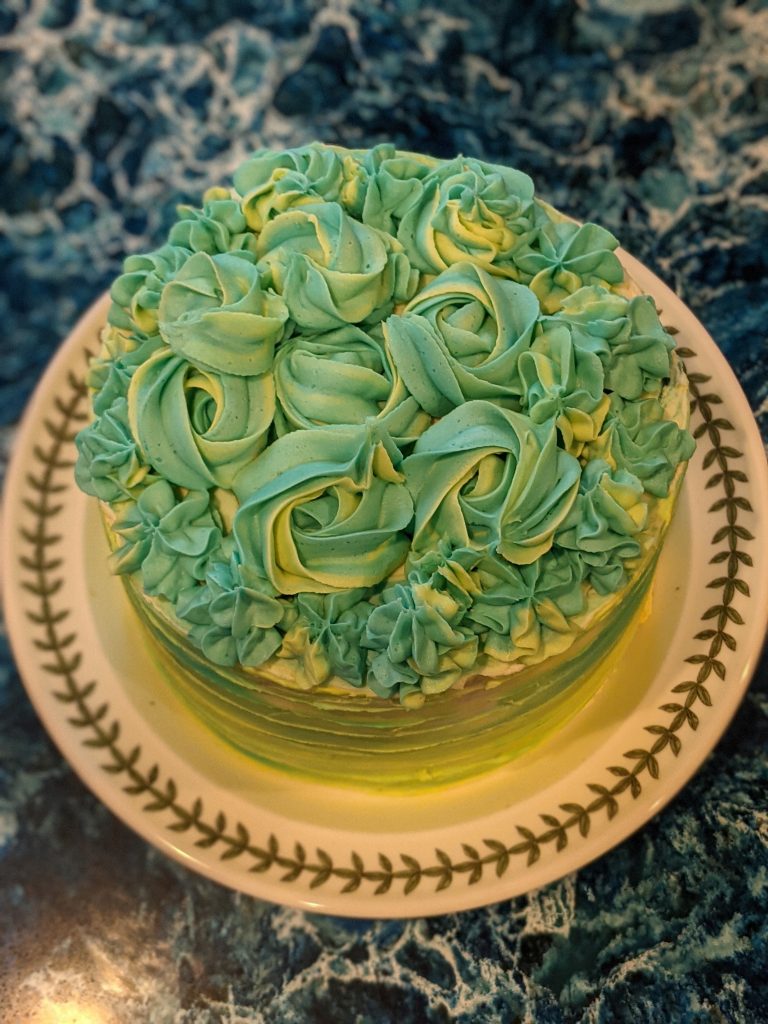 Her cake is admittedly better than mine. But then, she’s not a beginner either. And it tasted good too. No cake mixes in her cabinets. Again, lucky us!

So that’s all folks. That’s my month of April in 14 pictures. I had fun with it. I think I’ll do it again next month. I’d like to say I’ll make it a monthly thing. But, honestly, I’m not good about sticking to such commitments. So, instead I’ll say, it’s going to be my goal to do a month in pictures at the end of each month. What do you think?

2 thoughts on “A Month In Pictures”