I accepted a copy of Karim Soliman‘s Army of the Cursed for review, as part of Love Book Tours book tour. 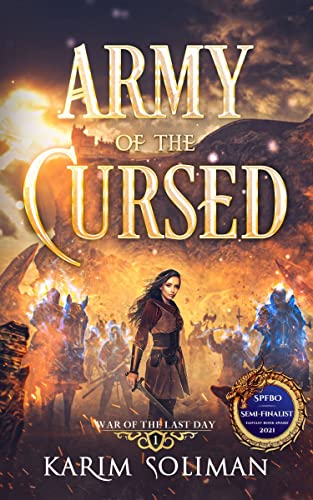 Everybody knew the Cursed were coming.
Nobody knew how to defeat them.

The Goranians thought they were ready to face demons in battle. But when the foretold War of the Last Day begins, one fact becomes clear: the doom of Gorania is just a matter of time. Now its fate rests in the hands of a hapless trio.

By joining the mages’ guild, Leila cedes her title as the Crown Princess of Murase. But as she struggles with her lack of talent, the Army of the Cursed approaches her country. Leila will have to decide if she is ready to protect her loved ones, or she should abandon them and run for her life.

Nardine, the Crown Princess of Bermania, hears a rumor that her long-gone father was so close to finding a weapon against the immortal demons. While she investigates what has happened to his unfinished work, a rebellion threatens to tear apart her kingdom.

Far in the harsh northern lands of Skandivia, Halgrim starts a perilous journey to claim a birthright he has been denied because of a lie. If his journey goes according to plan, nothing will stand between him and his ultimate prize. Nothing, except the Army of the Cursed.

Can the three unite and put aside their differences before it is too late? The entire human race is already on the brink of extinction.

I’m of two minds when it comes to this book. I enjoyed it. Never once while reading it did I feel like giving up, despite it being on the long side. The writing is quite good 99% of the time. I liked the characters. I liked the different types of interplay between the teen characters and the adults. I appreciate that this is a big world with many different cultures. And I liked the way the opposing armies both thought themself blessed and the other evil. Perspective matters. But I also had several complaints.

For one, I think the book is longer than need be. This is complicated by there being too many POV characters that the books cycles through; some of them given very little attention. This meant that sometimes I would come around to new character or back around to a character not seen for a while and be like, “Wait, who is this again?” But it also felt like characters just got dropped on occasion. Leila was notably ignored during any battle scene, for example (and this despite the fact that her knowledge in chemistry could have been quite useful). All of Halgrim’s family were often forgotten about for lengthy periods of time, etc.

I said the writing was good 99% of the time. That one percent is Soliman’s occasional tenancy to drop anachronisticly modern sounding phrases into the narrative or dialogue. It jarred me every time.

Lastly, almost all of the book’s action is during battles and, though they were well written, they got redundant after a while. Speaking of battles, as an aside—not even as a complaint, just as an observation—I have a comment on the cover. I like it. I’m guessing the girl is meant to be Nardine, since she is the princess most trained in martial arts. But not once in the entire book does a female set foot on a battlefield with the intent to engage. Not even Nardine. Several times queens are present overlooking a battle and a female mage or two lobs magic from afar, but not once does a female character actually fight among the soldiers. Which feels notable if you are going to have one trained to do so AND on the cover as if she is doing just that.

Actually, I think I have a comment on the blurb too (and this may be a bit spoilerish). It states, “…the doom of Gorania is just a matter of time. Now its fate rests in the hands of a hapless trio.” But that’s 100% not true of this book. I think it’s probably going to be true of this series. But until the the end of this book, it’s their parents who have all the agency and fight the foe. For the course of this book, the fate of the human race isn’t in the hands of the trio in the sense the blurb suggests.

All in all, however, I was more pleased than not. I’d probably pick up the second book to see where the series goes. 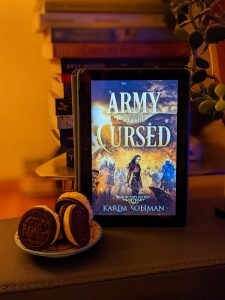 Army of the Cursed by Karim Soliman

Army of the Cursed Review