I’ve owned a copy of Melanie Nilles‘ Awakening since in 2018, though it had a different cover back then. I believe it is now a perma-freebie (or it just happens to be free right now), but I think I won a copy before it went free. (I have no real memory of any of that, but I have it marked as “won” on Goodreads. Thus all the “I believes” and “I thinks.” I’m not 100% certain.) 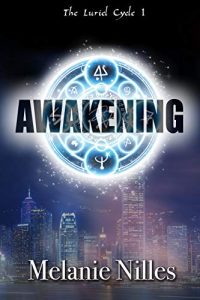 Lilly has been marked for death by daemons from a hidden world, a place known as the Shadow Realm. Within her has awakened the spirit of their enemy, one of the luriel. Such beings are myths to her, but one man is out to prove that they exist. The daemon slayer, Mychel, will introduce her to a world of shadows and light hiding beyond the comfort of science and technology, where ancient myths are real and an eternal war rages on, a war in which she has now been conscripted to fight.

One daemon is doing his best to destroy her before that happens. In human form, Darrac is able to get close to her and soon realizes that she is different—through Lilly, an ancient power has revived, a terrible power than can end the war…by eliminating both luriel and daemons. But destroying that power would mean sacrificing the one who has changed his heart.

Time is running out as the luriel within Lilly matures and her powers grow. One choice will determine the fate of two realms.

Let me tell you a story of marriage. A week ago I noticed that I own several books essentially titled Awakening, seven of them were unread. So, I set myself a challenge to read them all. I even cleverly titled it the Awakening Challenge…OK, maybe not so cleverly. When I told my husband about it, he laughed and said, “You know you’ll DNF at least one of those, right?” I responded, “Well, I certainly won’t NOW!” Because I dislike not finishing books generally and I hate doing it during a challenge (it always leaves me feeling like I didn’t really complete it). But to DNF a book and prove my husband right? THE HORROR! There is no chance any book in my Awakening Challenge will go unfinished.

But then along came Melanie Nilles’ Awakening, the third Awakening book to be read in my challenge, and I could tell very early on that this book and I would not get along. I wanted to DNF it at about page 25 and again on every page after that. But I persisted, finally finishing it by the strength of my stubborn determination not to let the marital unit get a free “I told you so” out of the deal.

Then there are all the truly stupid decisions Lilly makes, prioritizing things that make no sense. And there is her desperation for a man, any man. It’s pitiful and uncomfortable and made me dislike her A LOT. Darrac (even outside of being a demon, which was super obvious and unbelievable that Lilly didn’t believe) was emotionally manipulative and a bad boyfriend. But still Lilly clung to him like he was more important than her own life (literally).

But worst of all, I think, is the way everything was so repetitive. The narrator would tell you something was possible, then the ‘good guys’ would say, “I’m afraid this is going to happen.” Then the villains would have a conversation saying, “This is my plan.” Then it would happen. I’m just grateful we didn’t have to also get an “Ah-ha, this is how I did it” or “I was afraid that would happen” recap too.

All in all, I feel like the book did improve as it went along. But by that time I was so put off by the whole thing that I just wanted to trash it and move on. 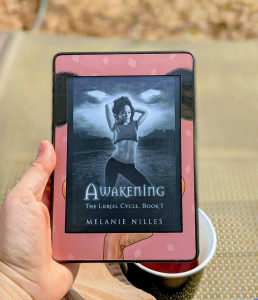