I picked up The Shard Chronicles, by Ono Northey, when they were free on Amazon last year. I chose to read the first book, Awakening, as part of my Awakening Challenge. I am reading eight books titled Awakening. 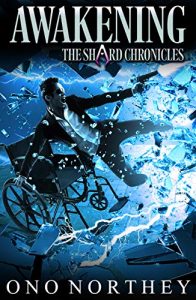 What would you do if the country you loved covered up the reasons behind your battlefield injuries and accused you of treason and madness?

Find out why readers are calling The Shard Chronicles “The Matrix meets the Bourne Identity.”

Oh, I have some serious mixed feelings on this one. On the plus side, I liked Steve’s sarcasm and wit. I may have thought it unrealistic how sanguine he was about the loss of his feet, but a lot of his commentary is funny (especially in the beginning). The flip side of this is that his sarcasm is often cutting and he’s plainly a judgemental asshole on more than one occasion.

Back to the plus side, the book starts out with a bang. We meet wheelchair-bound, Korean-American Steve and he proves himself to be a serious bad-ass. That’s part one of a four part book. On the negative side we have the rest of the book, but especially part two (which is the majority of the book.) While part one is action-packed and exciting (even if the flashbacks do go on a little too long), part two is dedicated to talk therapy and learning to be zen, and it was a snooze fest. Part three and four (both much shorter than two) do pick the action back up at the very end.

Plus column: I completely appreciated Steve’s internal commentary on the military and most things militaristic. He’s a little too good at everything, but he also has some interesting experiences. Negative: Men Writing Women. You’ve seen the memes, right? “She breasted boobily down the stairs” and such. This book has it in spades. Amber seems to serve no purpose but to give Steve someone to ogle and lust over and her character development is exactly as deep as a great ass and doesn’t walk sexily. Seriously, that the flaw that’s supposed to give her some depth—despite looking like a supermodel she doesn’t have a sexy walk.

In fact, women as a whole don’t come off well in the book. There’s the mother that left Steve as a baby, the incompetent therapist (the male one is marvelous in every way), the psychotic mystery villain, the Cheerleader Barbies that talk like faux valley girls (in other words imbeciles), even the random waitress Steve encounters is an abused, ex crack addict. And poor amber may be beautiful, but she’s called stupid and naive several times, enough that even when Steve calls her cute it comes off as condescending to her intelligence. I’m not calling misogyny or anything, it’s more that the collective impression one gets is that America’s culturally ingrained sexism has slithered into Northey’s writing, whether purposeful or not.

All in all, I’m undecided if I’ll continue the series. If the rest of the books read like the beginning and end of this book I’d enjoy it. If they read like the middle (most) of this book, I’d be too bored to bother.