I picked up a freebie copy of S.C. Mitchell‘s Awakening (Demon Gate Chronicles, #1) from Amazon. I read it as part of my March Awakening Challenge, where I set out to read eight books titled Awakening. 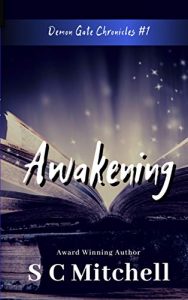 Thousands of years ago, a portal opened between Earth and the demon dimension of Ballor. Since that time, demons have been crossing over to hide among us cloaked in illusion.

Jack Hughes is cursed. Each full moon, his body is taken over by a demonic force. He’s learned to cope by locking himself in a cell each night to keep the demon from breaking free. It’s a dark secret he’s not willing to share with anyone, until one night when the demon breaks out.

Sorceress Anna Brown is one of the leading experts on demons for the Arcanists. She knows Jack’s secret and how to help him, if he’ll let her. The local demons are after Anna. She has a power they want to control. Does she have enough magic to save Jack and keep the local Demon Lord at bay?

I wouldn’t go so far as to say that this is super bad, though I might say it’s bad. Either way it’s far too simple and uni-dimensional to be called good. There is no depth here, not of characters, plot, mystery, world, anything. It makes for a predictable and uninteresting read.

On a personal note, I work assiduously to avoid rape in the books I read for entertainment. Despite that, it creeps in pretty regularly. It always annoys me. But it is especially annoying when authors use it as a short-hand for evil. Want a character to be an obvious villain? Make him a rapist, no further development needed apparently. But it’s even worse still when authors do this and don’t have the decency to call it rape. Mitchell has a horde of demons who keep harems to breed lesser demons and he references it repeatedly. But the sanitized language hides the horror of what he’s actually suggesting. The word rape isn’t once used in this context, despite rape being referenced multiple times. If you’re going to base a large portion of your plot on rapists raping, then have the decency to use the language.

Speaking of demons, it was painfully obvious that almost no real thought or creativity went into them. Mitchell held in his hands the chance to create something new and interesting, and I thought he might when one of the first demons was mentioned to be sexless. But as soon as we meet the rest of the demons we run right into patriarchal, no-thought plotting. The male thinks about his female mate as a good mate because she knows her place (below him), but he’s ready to trade her for someone younger and fresher. He leers and threatens rape (by any other name), etc. He’s a blunt instrument of a villain and the demons in general are cardboard cutouts.

All in all, disappoint but readable. 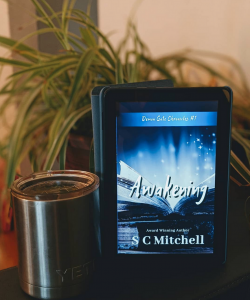