I am kind of enamored with the whole idea of blue aliens. I mean, why blue? I even wrote a whole blog post about it once. Plus, I truly enjoy cheesy sci-fi sometimes. No shade. So, I picked up the first book in this series Beautiful Thing (by Ever Nightly) as a freebie, just for the fun of it. Then I bought the Beautiful Lies and Beautiful Agony. I wrote each of the following reviews as I finished each book. You can kind of track my disillusionment. 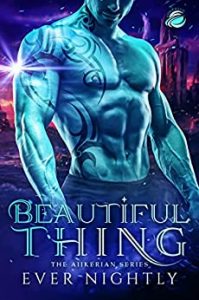 Just out of college, I’m recruited for a top-secret linguistics job. Easy, right? Translate for a few foreign prisoners and I’m home free. But when I arrive at Area 51, I’m swept into a world of secrets and lies. And the prisoner? Yeah, he’s not even human. His name is Specimen-One and he’s the most beautiful thing I’ve ever seen. But he’s an alien, so not exactly boyfriend material. I’m not sure he agrees, though. He wants something, and I have a sinking feeling that something is me…

You know, sometimes you dive into a book knowing it’s gonna be all sorts of bonkers. But you do it anyway because you want a little bit of silly fun. That was me and Beautiful thing. I knew the story wouldn’t be deep, the plot complex, or the events believable. But I figured it be a fun Sci-Fi romp. And I was right.

Ava enters what is supposed to be a high security military facility, but it’s run with a laissez faire I’d be surprised to find in the academic back halls of a community college. Which means ridiculous things are allowed to happen that no serious reader would believe. It’s also very clear what they want and why Ava is there, but she’s somehow oblivious to it. Which would be impossible to believe it I was meant to take it seriously. The romance is of the insta sort. But none of it takes itself too seriously. So, the reader isn’t expected to either. Which is why it’s fun. 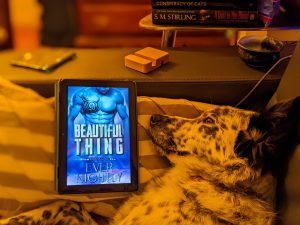 There were some formatting inconsistencies that pulled me out of the story on occasion. For example, sometimes Specimen One was referred to as S1 and sometimes as S-1. Sometimes telepathic communications were italicized, sometimes they’re weren’t. Which meant I had to stop and figure out from context what I was reading—that sort of thing. It could have easily been cleaned up. It is also a cliffie of the sort so common these days. It ends in the middle of dramatic scene. I know it’s not just this book or author. It’s basically the industry standard now. But I cannot emphasis how tired I am of books that don’t end, just stop. *sigh* But I have book two. So, I’ll continue. 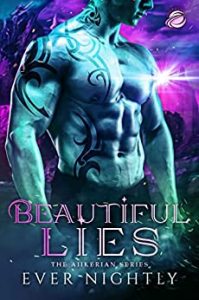 I’ve been kidnapped, and I’m completely alone. Area 51 has been destroyed, and S1 is gone. I’m left to sift through the pieces of what happened, and figure out how I’m going to survive. But as I dig deeper into the government’s secrets, one thing becomes abundantly clear…

Nothing is what it seems.

Meh, I didn’t enjoy this one as much as book one. It’s very much a middle book. Ava and S1 spend basically no time together. Ava just reacts to whatever is presented to her, with no particular agency of her own. It ends abruptly and, since this book is only 136 pages long and the next 156, there is literally no reason it’s broken in two, making this a trilogy instead of (at most) a duology. I don’t just mean 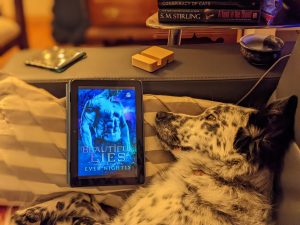 because the number of pages make it possible, but also because this book feels really incomplete. It feels like half a book.

I don’t mind paying for books, obviously. But I do resent having to go back and buy a second book when the previous one feels so lacking in substance and completion. Like, just make it one book and price it accordingly. Otherwise, I feel like I’m paying for two half books. And I resent the hell out of that, even if the cost is the same in the end. Just saying. 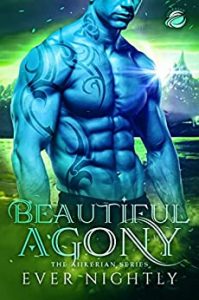 To say the entire universe is against us is an understatement.

The government is hunting us, and I’m learning things about myself that are truly terrifying. In the last few weeks, my whole world has been thrown into chaos, and I’m not sure of anything anymore. Danger stalks my every step, and I’m not sure whom I can trust. S1 has secrets of his own. Secrets that could threaten everything we’ve built together…

It’s ironic, isn’t it?
S1’s love saved me, but it might just destroy me in the end.

*Sigh.* So, while I enjoyed the silly-fun of book one, and accepted that book two might not have the same spark, being the second/middle book. I expected the series to redeem itself, here in its conclusion—book three. It did not. The series started fun because it didn’t take itself too seriously, so the reader was free to laugh with it. It loses that freedom here at the end. It takes itself seriously and asks the reader to do the same. But it’s still silly Sci-Fi romance. (That’s not a dig, I love silly Sci-Fi romance). It doesn’t have the depth of plot, development of characters, or basic cachet to truly be taken seriously. So, it feels like a kid playing dress up.

But where the book (and series) really fails is in S1. I accept that his character wouldn’t develop much in book one. But then he’s basically not in book two. And in book three—where the author really should have given his character some character—she just doesn’t. He and Ava have one brief conversation. The rest is just sex and running around. So, by the end of the THIRD BOOK I still know essentially nothing about him…neither does Ava. So, what is their great, intergalactic love supposed to be based on? I don’t know. I still don’t know THREE BOOK IN.

There are also plotting inconsistencies. Ava kills a man, for example, and it’s said that she’s in shock because she’d never taken a life before. I just went (out loud, I might add), “You shot a man in the throat—dead—in book two!”

The result of all of this is that the series finished with a pathetic whimper. The series lost it’s ‘don’t take me too seriously’ fun, but didn’t replace it with anything of any substance. Doesn’t give the reader a romance they can sink their teeth in. Doesn’t unfurl a plot that keeps us invested. Doesn’t create characters you know well enough to love. It’s all just sort of meh.