I borrowed an audio copy of Pippa DaCosta‘s Betrayal through Hoopla. 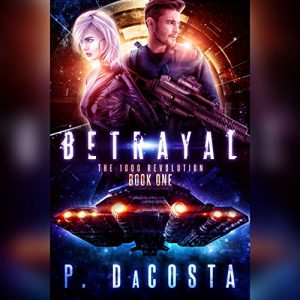 When Captain Caleb Shepperd is released from prison, all he wants to do is keep his head down and earn a living smuggling illegal cargo through the nine systems. So when a synth stows away on his ship, and brings with her a crap-ton of problems, including guilt-ridden secrets he thought he’d escaped, he’d prefer to toss her out the airlock. The problem is, she’s priceless tech, and he’s fresh out of credit.

#1001 is not meant to exist. Created for a single purpose, she has one simple order: to kill. But not everything is as it seems. Buried deep inside, she remembers… Remembers when she was human. And she remembers what Shepperd did to her. She’s not ready to die, but she is ready to kill.

This is a competently written book, but that’s about all the positives I have to say. It feels very pieced together of things an author thinks readers want. It’s got an anti-hero who’s supposed to be secretly noble, smart-mouthed female pilots, big-eyed innocent damsel who doesn’t need rescue, but still fill the role, etc. etc. etc.

The problem is that none of them are even a little likeable. The ‘hero’ is constantly checking out his employee who has been very clear she wants things to stay platonic. He bemoans how she has sex with everyone but him several times. This male idea that ‘if a woman is sexually available to anyone they should be available to me’ needs to be shot into the sun to die and I 100% never want to see it in my heroes! He also goes literally brainless if a woman pays him any attention, agrees to anything, etc. I get that the author was trying to play up his tragic past and how desperate he is (sex being a retreat from his problems), but he literally just felt obsessively controlled by his dick. If there had been enough depth in the book to address sex addiction or something, I might not have minded. But it was just sloppy writing and he just felt like a douchebag.

The syth was bland and the pilot a cardboard cutout (that’s it for the female cast, other than a whore with a heart of gold). If there is going to be a romance angle to the overarching plot with one of them, I still can’t tell you who the female partner will be (or if it’ll be a poly relationship), which is annoying.

All in all, not a winner for me. I’ve like others of DaCosta’s series. But I’ll pass on more of this one. The narrator did a fine job though. 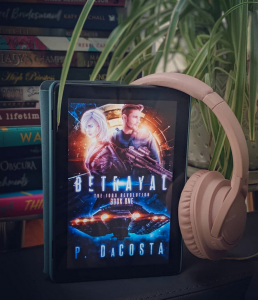