I consider this a little less than ideal. I read Lindsay Buroker‘s Mist and Magic and Sinister Magic. I picked them up as Amazon freebies. Then, I borrowed Battle Bond, Tangled Truths, Elven Doom, The Forbidden Ground, False Security, and Storm Forged from Hoopla in audio format. However, I listened to them while traveling. I didn’t have easy access to my computer to write individual reviews ,as I finished each one, which is my preference. So, I’m going to write a single review for the whole series (or at least book .5 through book 6, which is as far as I got). This isn’t how I usually like to do things, but such is life sometimes. 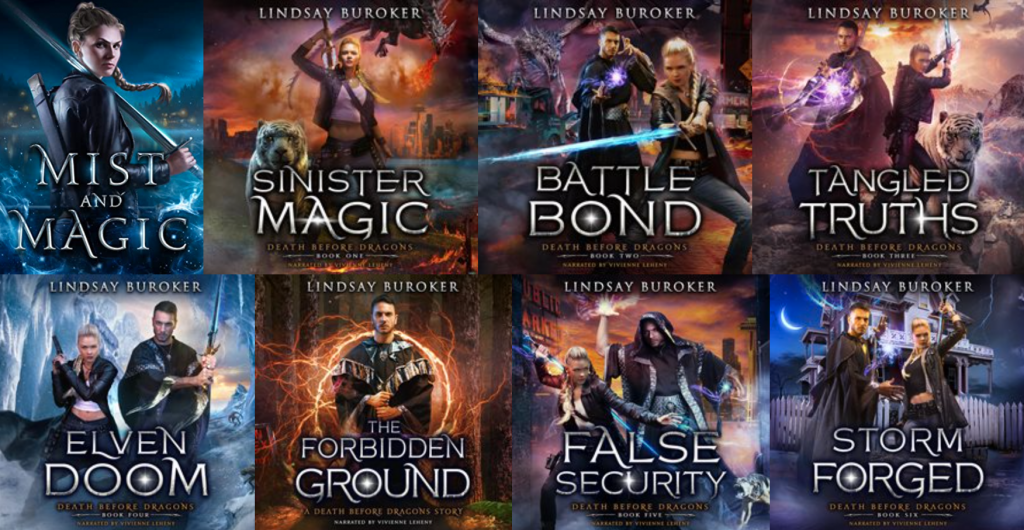 When magical bad guys hurt people, I take care of them. Permanently.

This doesn’t make me popular with the rest of the magical community—as you can tell from the numerous break-ins and assassination attempts I’ve endured over the years. But thanks to my half-elven blood, a powerful sword named Chopper, and a telepathic tiger with an attitude, I’ve always been able to handle my problems with aplomb. Maybe some cursing and swearing, too, but definitely aplomb.

I’ve read several of Buroker’s books by now and enjoyed them all. The Death Before Dragons series is no exception. I really liked Val and her sarcasm, especially when she bantered with Willard. I loved that she was over 40, even if the fact that she didn’t look it kind of made it only half as satisfying as it would be to have a 40yo heroine who looked her age too. I adored that Val was biologically a mother, but not maternal or raising her child. This is a reality authors very rarely allow female characters, especially ones we’re supposed to like. I appreciate the diversity of the cast. And each of the books wrapped up nicely, which I prefer over an overarching plot where you have to read the whole series to get any conclusive satisfaction. All in all, I would be happy to continue the series.

I did have a few complaints. Some of the humor was over the top silly at times. There was a running joke about the shoes the hero wore and if they made him look gay or not, which trod a little too close to a gay joke for my taste (pun intended). This was somewhat mitigated by a loved and important gay character (who wasn’t cliched). But it shouldn’t be a tit for tat situation. Similarly, Val’s refusal to learn to pronounce the dragons’ names was a sign of rebellion, but it also reminded me a lot of Westerners who can learn to pronounce Dostoevsky but not names from the African continent. Uncomfortably close to a problem, close enough to recognize, but not quite there.

Lastly, I liked Zav and appreciated him as a love interest, but I never truly felt the passion. There was only one sex scene and it was fade to black, so I suppose passion wasn’t the point. But I might have liked to feel the love more strongly.

I stopped at book six because that’s the last the library had. But if I came across book 7 I’d happily read it. But I’m not sad to have a break here either.