I borrowed audio copies of T.A. White‘s Dragon Ridden and Of Bone and Ruin (narrated by Natash Soudek) from Hoopla. 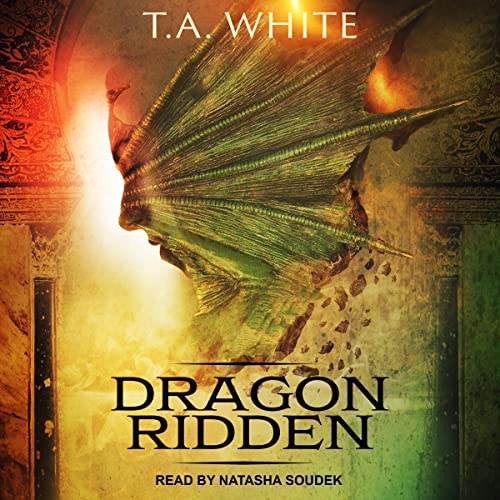 Tate leads a life full of secrets. Having an incredibly life-like dragon tattoo that moves when nobody is looking and no memory of her life prior to eight months ago can make things difficult. When a momentary impulse leads Tate to return an ancient hairpin to its rightful owner, it sparks a chain of events that soon affects every aspect of Tate’s life. Now with several people convinced that she holds the key to unimaginable power, Tate’s about to learn how a single action can have unintended consequences.

With no allies to watch her back, Tate’s going to have to move fast if she wants to survive in the city of Aurelia, where friends are often enemies in disguise and appearances are deceiving. She’ll find that monsters walk the labyrinth beneath Aurelia’s streets where the secrets to Tate’s past rest. Unlocking her hidden memories might just be the only thing keeping Tate alive and preventing the coming war.

I generally enjoyed this, especially as I got deeper into the story and the characters started to develop a little bit. There is definitely a sense of having been thrown the middle of something, like you’re missing a first book. Part of this is probably intentional on the author’s part, as Tate is supposed to feel this way because of her amnesia. But it also stems from Tate having relationships with people that the reader is told about, but we don’t observe. In fact, some of 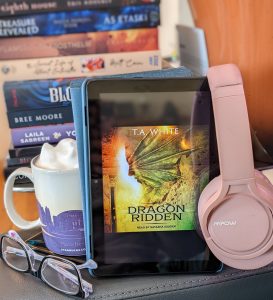 this lasts all the way until the end of the book. (I’m thinking of Ryu particularly.) I did like the world, though, and the tempting little teasers that there might be more to it (and Tate herself), and it’s history than anyone knows.

I will note that Tate is THE ONLY named female character that isn’t a villain. There’s a minor, unnamed female side character for a short while and a (probably) hologram girl. But other than that, Tate is the only significant, non-villain woman in the whole book. (And they’re especially cliched female villains, at that.) Why can’t fantasy authors, what I might consider the most creative authors out there, ever even imagine worlds with equal female participants? Tate is wholly surrounded by men being heroic, but men only. 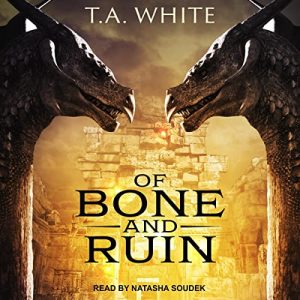 An ancient discovery has been made close to the city of Aurelia—one that promises wealth and power equal only to the dangerous secrets lying at its heart.

With three powerful groups vying for control of the discovery’s unlimited potential, it will take a delicate touch not to tip the scales toward war. Something Tate Fisher, a newly accepted dragon-ridden with a bit of a memory problem, has never been known for possessing.

Tate must learn to navigate the undercurrents of this society if she wants her friends and empire to come out the other side in one piece. Because these secrets involve Tate, and they don’t intend to let her go so easily.

I continue to enjoy this series, though I liked this second book slightly less than the first. Tate is just becoming so very much a special snowflake. And while I’ll acknowledge that White finally 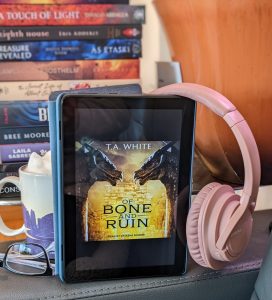 created some female characters in the world (which is an improvement over book one), she also wrote Tate as perfectly willing to take instruction from all the men around her. Even her 17yo side kick gets  to boss her around, because as every ‘not like other girls’ ever written she just can’t be bothered with fashion. It’s a small thing, in the specific, but a painfully common one in general.

I did hope there would be a little development on the romance front. But there really wasn’t. So, that’s still simmering. And there have been several big hints at large plot development that haven’t happened yet. All of which makes this feel very much like a middle book. But I still had fun following Take and Dew Drop’s adventures and plan to read more of the series.

The Reading Chick: Dragon Ridden Review & Of Bone and Ruin