I received a signed copy of Fae’s Torment, by Atlas Rose and Kim Faulks in a Supernatural book Crate I ordered. 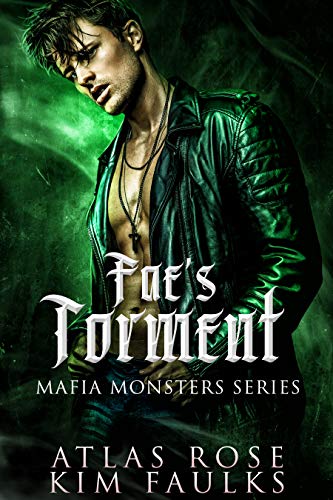 It burns in my veins and keeps me awake at night, hunting Crown City’s streets like the ones who took from me.

But it’s not these streets where I want to spill blood. It’s over there, across the bridge. Where the shadows of this world cloak their sick, foul secrets…and where they trade magic for mortal lives.

I can’t get across there. Can’t walk in their world. If I could, I’d take this knife and shove it between his ribs.

But I doubt I’d find a heart.

None of them had hearts. Not their leader, Shrike, or Mojin, the one I see the most, or Honor and Ruin, the ones I don’t see. The ones no one sees.

They’re the ones who took my brother from me…

Only I found a way to get to them now. This new seductive club the Wolves opened  called Dark City needs mortal women to entrance these beasts and I’m the one they’ll want.

The one who hides the truth behind her smile.

And a knife against her thigh.

Only when I take my chance I’m the one taken instead. But my enemy doesn’t want me dead…they want something else. Something those dark Unseelie eyes promise…and I might never sleep again.

I was reluctant to dive into this book. It does have a note that says, “Each Mafia Monster series can be read as a stand alone in the same world. There is cross over of your favorite characters to help you understand underlying motivations better, but it’s not necessary to read from book one.” The thing is, I don’t always trust authors when they tell me a book can be read as a stand-alone, especially when—like here—it is either book 7 in an over-arching series or book 1 in a new one. In the end, I gave it a read. I’d say it’s just followable. I was really confused in the beginning and, honestly, never had a firm grasp on the world.The struggle is trying to pick apart what I wasn’t understanding because I’d not read the previous books (that the authors say aren’t necessary) and what I didn’t understand because of poor plotting and world-building.

Despite all of that, I was still able to enjoy Izzy and the fae’s insanity. None of it makes much sense, if you think too hard about it. She’s always trying to kill them, for example, but never seems to do more than press a knife to their neck or leg. If you really wanna kill someone, why are you pausing to threaten and not just doing it? Over and over again, I wondered this. And the potent mix of hate and lust that the fae so liked in Izzy would be seriously detrimental to her mental health. Talk about toxic and abusive! But by the end I was invested in the craziness enough to look for the next book (which isn’t out yet).

My only real gripe (besides the thin world) was the utterly unnecessary attempted rape scene. It contributed nothing to the book other than the apparent authorial need to ask, “can a heroine truly be strong unless someone’s at least tried to rape her?” It didn’t even make sense. She suicidally throws herself at groups of immortals but basically does nothing but beg when  a couple human men nab her. Ummm, that’s one seriously inconsistent characterization there.

Outside of that, I did have fun with this one eventually. It’s never going to top my favorite list, but I look forward to book two in a “it’s bonkers but fun” kind of way.