I purchased a Kindle copy of Gilded Fae, by Erica Reeder. 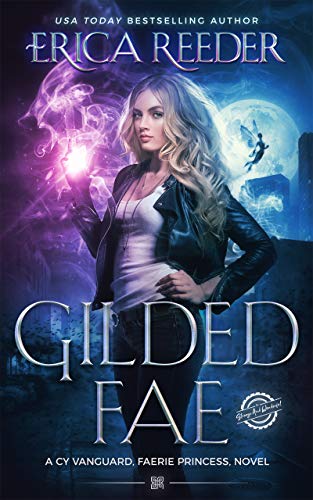 When a dead faerie lands in her lap, bounty hunter Cy Vanguard knows her life is about to change.

Dandelions. People hate ’em. You know what Cy hates? Faeries in New York City. Sure, it sounds hypocritical since she is one too, but she doesn’t have wings. That means she gets a pass. Court law, not hers. Law or no, her winged compatriots keep popping up everywhere in the city like…well, dandelions. Talk about annoying. Especially when they’re dead.

Add one mouth-watering vampire– the mortal enemy of all faeries– to the slip-and-slide that has become her life and things become leakier than a porcupine’s umbrella. Now, Cy is slapped in the face with the fact that she might be done with faerie, but faerie isn’t done with her. She can’t run anymore. She has to choose. A people who never accepted her? Or a fiery love and the death of everything she knows?

Soooo, I didn’t love this. In fact, I wanted very badly to DNF it based on the characters unbelievable stupidity and lack of care or concern for the safety of her people. The only reason I didn’t is that I actually bought the first 3 books in the series at the same time. I wanted to at least finish book 1, so that I can at try book 2 to see if the series improves. But I didn’t enjoy the book and honestly skimmed a lot of the end of it.

The problems are multiple. As I said, the main character is just TSTL. The fact that the author morphed the plot to make it all work out doesn’t change how dangerous and stupid her actions were. I’m talking taking a stranger and a human who doesn’t know the supernatural exists to investigate a supernatural death, thereby exposing her entire race (and the author never addresses this). And believe me when I say NOTHING in this decision made sense, plot-wise.

She’s also supposed to be a well-trained martial artist, but I don’t think she wins a single fight the whole book. And I’m supposed to believe faeries all have special powers (control of wind, fire, electricity, etc) and they’re not trained to use them defensively (but they learn muay thai)?

Repeatedly the author would hand us an interesting event (finding out her friend is a werewolf, or that her boyfriend is a vampire, for example) and then cut away and never return to the scene. In fact, sometimes we never even saw the character again. The plot meandered and felt anchor-less. I was honestly confused by a lot of it. The love interest’s character development is that he is hot. That’s it in its entirety. And lastly, while I could handle the occasional grammar and punctuation error, the inconsistencies almost drove me to distraction. (For example: asking to borrow someone’s phone, then digging her own out to make a call. Thinking ‘How could no one have told me?’ about something and then the next paragraph saying ‘The report said…’ 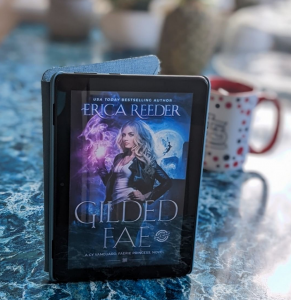 about that same thing. Being rescued from a party at home and then her asking ‘how did you know I was at the club.’ The ‘whole vampires think we’re extinct’ (and comment on it) while vampires are actively using faerie blood as a drug in front of them. Where did she think it came from?)

I am willing to give book two a chance. I read a review saying Sven isn’t in it. So, that gives me hope. But if it’s not better than this one I won’t bother with book 3, let alone the rest of the series.