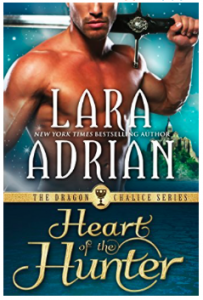 I picked up a copy of Lara Adrian‘s (writing as Tina St. John) Heart of the Hunter from Amazon, in November of 2012! Glad to see I got around to reading it in a timely manner. As it’s

Description from Goodreads:
Ariana of Clairmont would risk anything to save her kidnapped brother, a quest she knows is fraught with peril. Her only ally is Braedon le Chasseur, a formidable knight with a mysterious past, whose scarred face and brooding nature mask a soul filled with pain. Ariana fears this dangerous man and the secrets he strives to conceal—but Braedon’s touch is pure seduction, his kiss a potent lure that tempts her into a passion she is powerless to resist.

Once known as The Hunter, now haunted by a dark legacy he struggles to deny, Braedon lives in a world of shadow and isolation—until he is thrust together with an innocent beauty in need of his protection. Embarking on a journey that will lead them to a legendary treasure, Braedon will be forced to confront old enemies and the stunning secret of his true nature—or risk losing Ariana and the only happiness he has ever known. . . .

Review:
Ok look, I chose to read this by scrolling through my Kindle and going, “Oh, historical paranormal romance with dragons. Yes please.” I didn’t look farther than that. I didn’t notice I’d had the book since 2012 or that the first edition on Goodreads is from 2004. Because if I had, I wouldn’t have bothered with the book. I would have know in advance how much I’d dislike it.

As Suzanne Brockmann recently addressed in her RWA speech, the language of romance novels used to be a lot different, back when penis wasn’t allowed, etc. So you got a lot of ‘velvet covered steel” and “pearls of womanhood.”

And OH MY GOD, while I’m no fan of cunt, I’ll take it over “glove of her womb” a hundred times over! I am Modern Woman, hear me…panic over the fear of accidental pregnancy for my whole sexually active adulthood. Unless the point is implanting semen in said womb and impregnation, do no put the word womb in a sex scene. JUST DON’T, especially in a historical where prophylactics don’t exist anyhow. And it’s used over and over here, “glove of her womb,” “entrance of her womb,” just “her womb’ (which is even worse), “fist of her womb,” and of course her climax floods her womb and her womb expands and contract with orgasm. OMG, stop!

I’ll grant that Adrian at least provided a little foreplay and the hero didn’t pound away like a jackhammer in a vagina that should be bone-dry for all he touched it. And the heroine had her own sexual agency. But sadly I had trouble with that too. The word innocent/innocence is used about a million times to describe her (especially in regard to being a virgin), as well as guileless, naive, naïveté, etc. Then, BAM, she’s giving head like a boss with no instruction. How exactly would such an ingénue, as she’s supposed to be, know anything a blow jobs? Tell me, how?

And then there was the fact that as soon as the hero decided to help and protect the heroine, all this started: “That’s right. From now on, I decide our course of action. ‘Tis the only way.” “…and do whatever I tell you. Understand?” “Don’t ever disobey me again, do you understand? If I tell you to do something, know that I have my reasons. I must be able to trust that you will do as I say, not question me or defy me.” (These are just a few example.) And I’m all reading this book like, Dude, you are just some rando off the street. Who are you to take control of her like that? I don’t care if it is historical. You’re not her father, brother or even her husband yet! Fuck off. But of course she lets him make all the decisions and falls in love with him instead. Plus, any time she tried to do anything on her own she went and did something stupid, like almost get raped. (And it’s worth mentioning, just in case this dumpster fire isn’t obvious enough, she initially met him and then he immediately saved her from being raped and sold into sexual slavery. Because of course he did. What else would happen to a woman out in the big scary world of men? It’s certainly the only thing that ever seems to happen to them in books like this.)

For those like me who like historical paranormals, know that there are no dragons in this book and the paranormal aspects are almost nil. They certainly aren’t well integrated. So, as you might guess, I hated this book. This is the sort of book that kept me from reading heterosexual romances for so long. The industry has moved forward, things have gotten better. But this shit can go die.