I received this edition of a compilation of two Atlas Rose books in my September Supernatural Book Crate. It contains two first in series, I don’t Kneel for Monsters and Wolf’s Bite. Though some older editions of the latter have Kim Faulks on the cover too. So, I’m assuming she is (or was) a co-writer. 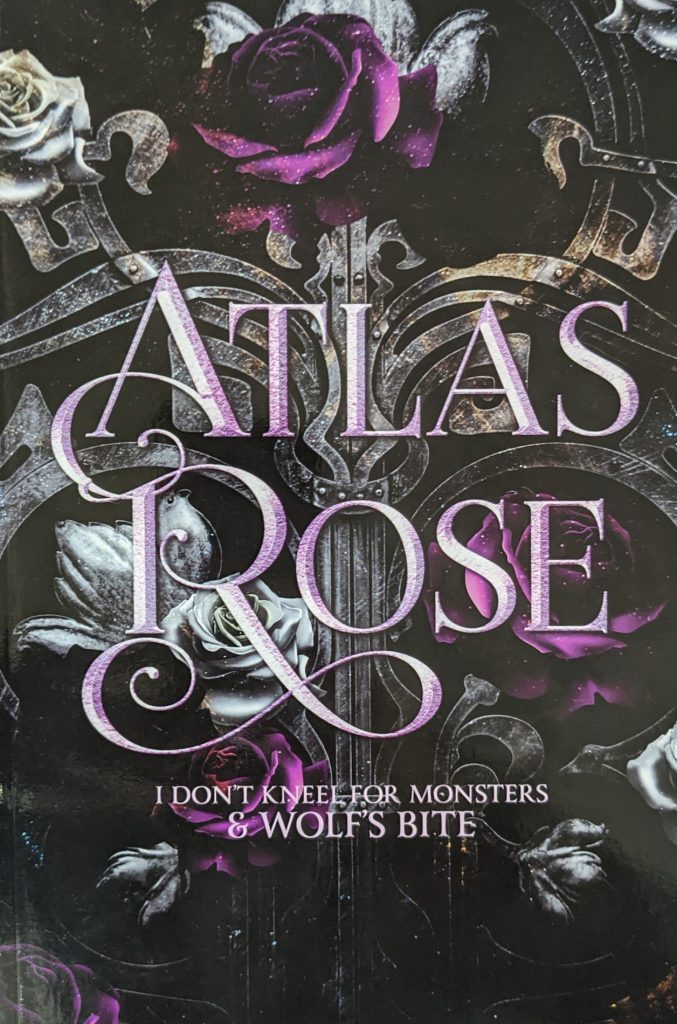 I don’t Kneel for Monsters:

I might be chained, but I’m no prisoner.
They won’t let me leave this pack of demonic beasts with their red glowing eyes and their pawing touch. They keep me locked up during the day and surrounded by their heat at night.

They keep me…
Confined.
Controlled.
Consumed.

The capture is something I can’t stop thinking about.
Fangs and claws. Their hunger is insatiable.
Until the night I saw him.
A man standing in the middle of a labyrinth where we hid.

A man dressed in white.

He’s here to save me. Here to get me away from these monsters. I just know it. I’ll run to him, the first chance I get. I’ll get away from those demonic creatures…I’ll save myself anyway I can.

I have to say that I’m just confused by this book. There are so may glaring inconsistencies (both in the plot and in the writing itself) and then the whole thing ends on a cliffhanger without providing the reader any sort of payoff for sticking with the book through all the confusion.

Here are some of the types of inconsistencies I mean. In the beginning 5 wolves break into Arden’s house and kidnap her. However, for the rest of the book there are only 4—Moody, Broody, Cheeky, and Alpha. (She gave them the stupid names to annoy them.) We lost a Hellhound somewhere. Where? No idea. I can’t even be sure when, because most of the time I was uncertain which hellhound was doing what.

I’m pretty sure her heart stopped about six time before she actually ‘died.’ I was never sure if it was creative license and hyperbole or if it was actually stopping. The button on her jeans was popped off twice. She was later wearing panties that had already been ripped off, same with a shirt. Do her clothes heal? So, the kind of stuff a half way attentive beta reader or editor would have caught.

Mostly I won’t be continuing the series though, because (unless its a duology) the next book will 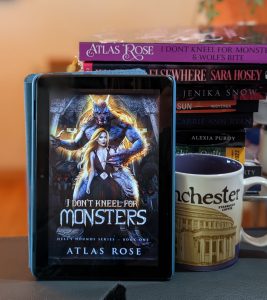 probably provide as little pay off as this one; same for the one after that, etc. I realize indie authors are being told this whole half-a-book to hook readers is what they should be writing. I know it’s a whole thing in the industry. But I cannot express how much I hate it. In fact, the physical copy I have also contains Wolf Bite, as I said. And I’m strongly considering not bothering to read it, even if that leaves the ‘book’ unfinished and I can’t move it from the unread to the read shelf. Simply because I don’t really want to set my self up for another disappointment of a half-written book. Can this trend die yet?

I carry his bite mark on my shoulder…and the memory of what I’d done in his bed.

Phantom, the Alpha of Crown City Wolves might think he has a handle on me…
He might think this is more than what it was…

He’s about to find out he’s wrong.

I don’t belong to the Wolves of Crown City. I belong to the FBI.
My sole purpose has been hunting scum who sit in their ivory tower and shatter people’s lives.
I’ve hunted the Costello for years now.
They’re lower than low…they are liars…they’re mobsters.

This is more than a case for me.

The last bullet in my father’s policing career. Ruined because of them.

Only a war erupted. A war which I’m now part of…a war between the beasts that roam my city and the powerful Immortals they answer to.

I replayed that night in slow motion. Fangs. Blood…and Phantom. The Alpha of the Wolves. The one I saved from a rogue Vampire.

And the one who saved me.

I will grant that this book was significantly better than the first in the compilation. But that’s a long way from saying it’s good. It could be a heck of a lot closer though, if Rose hired an editor…or even just enlisted a friend to beta read and keep track of the inconsistencies.

About halfway through this book, I posted a whole Tiktok suggesting some authors need a beta service geared solely toward keeping track of a character’s clothes so that they don’t take bras off twice, etc. I didn’t name her, but Rose was who I was talking about.

I’m generally pretty patient about editing. But Rose’s editing is so consistently shoddy in this department that I started to lose my will to continue, after a while. Oddly, it’s not even typos and the normal sloppy editing. Rose just can’t seem to keep track of the elements of her plot. A wolf approaching someone who is already leaning on him, for example. Clothes that get taken off or ripped up more than once, etc.

Outside of the editing issue, I’m torn. I did like the characters. I especially liked how desperate Phantom and his pack were and how we got to see his POV, even if he showed an alpha a-hole face to the world. I’m interested to know what happens next (if I can tolerate more of the inconsistencies). 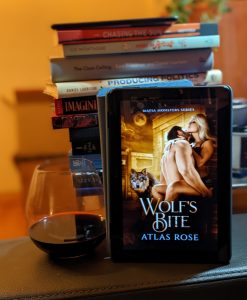 I wasn’t aware that this is a spin-off series. And there were definitely some elements that made no sense to me. Characters were named that were not in the book, a whole war raged for reasons I didn’t know about, etc. So, I would not recommend reading this without reading Rose’s other series (despite being labeled book one). And it ends on a cliffhanger. I am SO tired of books that don’t end!

All in all, I think I’d continue the series if I came across a free copy. But I don’t think I’d buy another book so poorly edited.