Those of you who read this blog on any sort of regular basis know I’m a sucker for challenges, doing several a year, most concurrently. So far this year alone, I’ve challenged myself to read a weeks worth of books with Omega in the title. Then, I felt obligated to do alphas too. I started the year with a broken wrist, so I challenged myself to read all my short stories and novellas. (They require shorter reviews, usually; less typing.) I’ve been adding on to the tail end of last year’s Annoying Closeup Guy challenge, as I’ve found I have more books with him on the cover now. And of course I’m doing the Goodreads challenge, which I pledged a shocking (even for me) 300 books this year. (I wanted to account for so many shorts, so I upped my goal. I expect to surpass it.) I say all that because I intend to add another challenge to the list and this one I think is more important than any of those.

A few weeks back, I went through the books I’d read so far this year, looking to see how diversified the authors were. I honestly went into this expecting to find that I read a fairly diverse group of authors and could feel confident in my position as alley and amplifier of minority voices. I was severely disappointed. I found that despite my good intentions and opinion of myself, nothing was being translated into actual action. The vast majority of the books I’d read were by cis-gendered, straight, white women. Have I done better than someone who isn’t paying attention? Probably, but not by much, and not by enough to feel smug about it. (Not that I should anyway.)

The simple fact of the matter is that any time I picked up a book without actively searching out and choosing a book by an author from a minority group, it was invariably by a white woman. And this was true for the characters in those books too. They were overwhelmingly able-bodied, white people. So, I committed myself to do better; to search out authors of color, authors who are trans or non-binary, or queer, or have a neurological difference, or aren’t American. Diverse characters is a natural by-product of that. And I’ve found a challenge to support this. 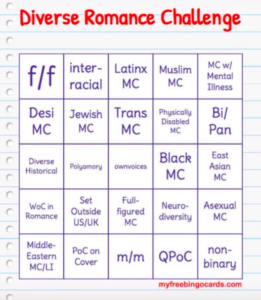 Let me introduce you to the #DiverseRomanceBingo card. I came across this in a group I’m a member of, though there has hence been a Goodreads group established for it. The challenge began yesterday, Sept 17th, and runs until the end of the year, with the goal being to complete as many squares as possible in that time. This requires reading a book that includes the descriptor in the box and reviewing it is strongly encouraged.

Some will be no problem. I read plenty of M/M books. But others will take some searching. I can’t think of a romance, off the top of my head, that qualifies as having a Desi main character or love interest. The Indian subcontinent just ins’t somewhere a lot of characters in books published in English come from. It will require effort on my part to find a book for that square and as I’d like this challenge to also support #OwnVoices (which is a square, but also a broader goal) I’m hoping to find a romance by a Desi author to boot.

But this brings us back to my earlier disappointment and the realization that truly supporting diversity in publishing takes more than happy thoughts. It takes effort and action. This is what makes the bingo card so appealing to me. It makes such action accessible and engage-able. Obviously, it’s not enough. But it creates a visible and accomplishable goal that moves the participant in the right direction.

I’ll be starting this afternoon with Karen Stivali‘s Moments in Time series. It’s my understanding that some of the main characters are Jewish and bi. Those are some of my boxes. The book is also written by a #OwnVoices author, but you’re only allowed to tick one box per book and I’m choosing this one for the bi MC box. And I will continue in just this manner until the end of the year, when I’ll write a wrap up post. We’ll see how successful I am. Intentionality is important. So, I’m hopeful. Plus, some friends and I got together and put together some ideas.

I invite anyone who is interested to download the card and join me. Drop a link to your own post and/or #DiverseRomanceBingo reviews and I’ll check them all out. I do want to add a final word of caution, however. This is something that has to be approached respectfully. As soon as it’s reduced to just a game or something done for the social justice cookie, we risk tokenizing, objectifying and even commodifying the individuals represented. No amount of amplifying the group can excuse injuring the individual. Having said that, let’s spread the word and thank those responsible for creating the card. (You know who you are.)

3 thoughts on “Join me in the #DiverseRomanceBingo challenge.”