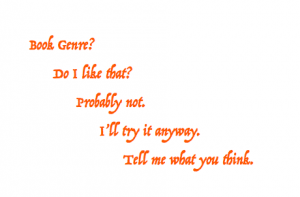 This is one of those, probably ill-advised, posts in which I consider my own opinion. It came about because, the other day I was scrolling through Twitter and passed a tweet in which someone was disparaging reviews that say something along the lines of “I don’t generally like this genre, but I gave this book a try,” and then give it a negative review. There were several responses, vehemently agreeing.

As someone who has written reviews that say exactly that, I was perplexed. I considered responding, but decided to let it go. It wasn’t someone I knew enough to be certain debate on the subject would be welcome, and it’s just too easy to write what you think is a balanced polite comment, and have it come across as aggressive. In the end, I didn’t want to be that person who rolled up in someone else’s space and says, “But…”

But the tweet has stuck in my mind. The poster—who I assumed was an author, but I honestly don’t know**—is 100% entitled to their opinion. This post isn’t directed at them specifically, but the thread so reminded me of one particular review I wrote in the early days of this blog—This one—that I’ve been kind of ruminating on it ever since.

I’m not going to rehash the whole review. You can follow the link to see it on Goodreads.* But the review starts with this:

Oh God, I wish I hadn’t read that. Historically, I’ve not been a fan of contemporary romances. I often find the female leads weak-willed and the plots too sappy for me. I know that’s what some people like most about the genre, but me not so much. Despite my hesitations about the genre, I was tempted by the sarcastic tone of the book’s description…

I went on to say that I did not, in fact, like the book. And I promptly got this comment:

Then, as now, I’m confused by this opinion. Ok, that’s not true. I was then. I even spoke to someone in real life about the comment, only to have them say, “Sorry, but I agree with the commenter. If you don’t like the genre, don’t read the book.” Now, I understand where the opinion comes from, I just disagree with it.

Which is where the meat of this post comes in, why I disagree. To say that people who don’t generally like a genre shouldn’t ever read books in that genre is exclusionary and ridiculous. Life simply isn’t that black and white.

People’s opinions change, and if they never try something they might not like, they’d never know it. (Not to mention other reasons to read a book you might not like: to expose yourself to opposing opinions, book clubs, school, friends’ recommendations, cross-over, etc).

Let me give you a personal example. For most of my life, I thought I hated romance books. Every time I tried to read one, I was dissatisfied. But I was often tempted by the blurbs, especially if there was a fantasy element. So, every now and again, I’d give in and read one. 99% of the time I finished them unhappy. But there was always that one, which kept home alive.

As I got older and my understanding got more mature, I realized that I don’t hate romance. What I hate is the type of gender politics that are so common in romance books. So, if I was careful about which authors I read and/or read LGBT+ romances (which have their own problematic aspects, but not my particular rage triggering ones) I could happily read a romance book…or 400. But If I’d given up and said, “I hate romance” and never read another one, I’d have never realized my mistake and would have missed out on some of my favorite books.

So, I dislike being told I shouldn’t read a book in a genre I generally dislike. There are always exceptions, and I’m always hoping the next book will be the one. Which brings me to the original Tweeter’s point about reviewing books in genre’s you don’t like. Which is subtly different that reading them. No one would argue with, “I generally dislike this genre, but took a chance on this book and loved it.***” No one would tell that reviewer that they shouldn’t have written their review.

Reviews of such books is a topic that I take a related, but different issue with. Telling reviewers that they shouldn’t review books in genres they don’t generally choose to read presumes that reviews are written for a single purpose. What’s more, I’d assert that it positions the review in the perspective of the author and/or fans of a book/genre. It suggests “the review space about book X is only for people like us, and if you don’t share our view, you’re not welcome at the tea party.” It forgets that, while a review’s primary purpose may be to inform readers about a book’s quality (and we could argue if this should be objective or subjective quality), it isn’t a review’s only purpose.

I for one, write reviews as a sort of book journal. It’s my personal closing out the book ceremony. And as such, with very few exceptions (usually latter books in long series, in which my opinion hasn’t changed since earlier books), I review every book I read. Good, bad, indifferent, they all get a review.

So, how should I handle books from genres I generally dislike, took a chance on, and found they were not the exception to the rule? I’m going to review them. I say, “I generally don’t like this genre, but…” Why? Because that flags all readers of that review that it’s being written by someone who was not predisposed to like the book. It says up front, that the review could be considered bias. It warns readers that are fans of that genre that they can disregard the review as an outlier. I consider that sentence, and ones like it, to be a favor to future readers.

So, when people take issue with it, I’m always like, “Well, I guess I could leave it off and just let the review stand, unaccompanied, as a negative review.” Would that be better, you think? I don’t.

That single sentence also speaks to other readers who might not be regular fans of that genre, but are considering taking a chance on the book, just like I did. Maybe they’ll decide against it. Maybe they’ll see the points I make and decide they’re not the ones that bother them and read the book anyway (or because of the review). Either way, the review is still serving it’s purpose. It’s still a valid review.

I feel like telling readers that they should only read books in genres they particularly like, and should only be allowed to review books from such genres (and yes, I feel like this becomes a prescriptive, allowance issue) is akin to people claiming you shouldn’t write reviews of books you don’t like. Which means the only reviews to be written are positive ones. Which means review spaces lose their critical edge and instead become fuzzy praise boards.

This is something I REALLY disagree with. If someone chooses to only write positive reviews, that’s their choice. But the moment they say someone else shouldn’t write a negative, one I start to grind my teeth. Similarly, if someone chooses not to read or write reviews of books from genres they are not pre-established fans of, that’s their choice and I welcome to it. But as soon as they try to tell me I shouldn’t do it, we have friction.

* I don’t actually remember why I reviewed it on Goodreads and Amazon, but decided not to post it here. Maybe because it was my first year as a blogger and I wasn’t certain how to handle poor reviews yet. I don’t know, 4 years later.

**I didn’t at the time realize the tweet would still be in mind two days later. So, I didn’t think to take a screenshot. This post simply wasn’t that premeditated…or even meditated.

*** Which is basically the review I wrote last week for The Guernsey Literary and Potato Peal Pie Society. I read it for book club, despite having no interest in it.