Soooo, since I still have a broken wrist and still don’t want to write long reviews, I’m still working my way through all the novelettes on my bookshelves. This is the fifth such post. Surely these things multiply in the cloud. I can’t honestly believe I downloaded so many, especially since I generally only do so when I’ve not thought to check the page length of a work and one-click thinking the story is a full novel.

I’ve mostly just been working my way through the list, shortest to longest. I’m up to 70-79 pages long. But I’m bored by so many short pieces. I much prefer to sink into something more substantial. So, I’m doing something a little different here. I went through and picked out all of the pairs. That would be any true duologies, a series that may be longer but only two books are currently out, or a longer series that I only have the first two books of. There weren’t as many as I expected there would be and it was entirely accidental that they all happened to be erotic. 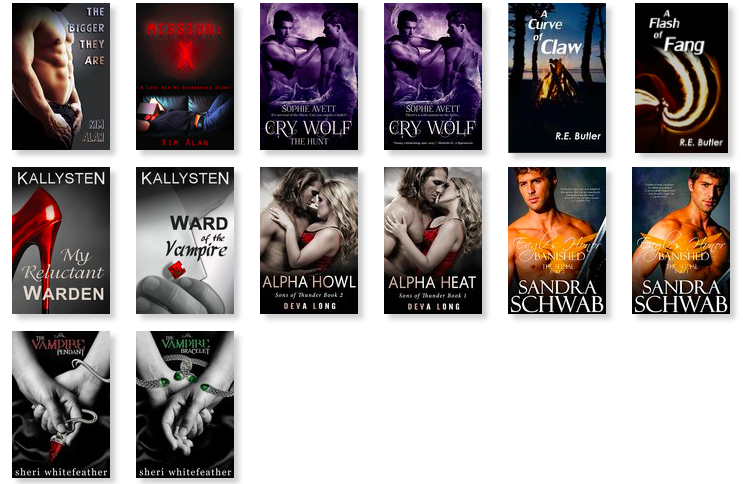 Mission: X: Basically ok, but nothing exceptional. I thought it was nice to see the dom as the one pining for a change, but I bore easily of the common, apparently scripted dom role and speech. The use of ‘boy’ seems to especially make me groan, “not again.” (Maybe it mimics some real-world play or something, but it shows up so regularly that it’s essentially been stripped of impact for me.) There were some hot bits and sweet bits and I found it generally enjoyable, but that’s about it.

The Bigger They Are: Meh, basically just one long, overwrought and unrealistic sex scene. Entertaining but not much more.

Cry Wolf: It’s utterly ridiculous. It is. It’s a mash-up of several myths and fairy tales (I think that’s the series schtick). But despite being strung together, just this side of too much and minimally developed, I did enjoy it (probably more than it warranted). It’s also, surprisingly, a pretty clean read.

Cry Wolf: The Hunt: Much like the first one, I enjoyed it more than I think the skill of the writing deserves. But I prioritize enjoying myself, so, whatever. I did have a huge problem with the fact that the initial problem that caused discord was one character started pushing for sex and the other felt he was being forced and had no expectation that the other would respect his wishes (essentially raping him if he didn’t leave), but by the end, the problem they solved was the first finally agreeing to have sex. Ummm, seems the bigger issue got dropped in there somewhere!

A Curve of Claw: I suppose my dislike of this book might just be a matter of taste. I dislike slut shaming and you would think that the fact that this MC was sleeping with 7 men and standing up for her right do so would be a good thing, but it wasn’t. It rubbed me wrong for a couple reasons. First, they were the 7 most powerful men in the area, all fighting for her attention (the old she’s so special for some unknown reason trope). Second, they bought her expensive gifts, like cars, and sent her the clothing they wanted her to wear on their ‘dates.’ By 25% I’d decided she read like a high class prostitute instead of a sexually liberated woman, like she was the cliche sexually available woman who therefore must be available to all powerful men. Third, she’d described as 18+3, so basically 18 (this is stressed that she’s 18), making her a sexually promiscuous girl instead of woman. Fourth, the antagonist of the story is one of her jilted lovers and it’s suggested that her sexual activity was to blame for the coven’s problems (basically shaming her past activities). All this countered by five, after one good f_ck she settles down into marital bliss and it’s ever so much better than playing the field. So the whole story is basically framed around how much better being in a committed relationship is than not. Maybe not slut shaming, but at the least admonishing. Then we have the oddity of it being stressed that bears DO NOT SHARE, therefore her sexual behavior would have to stop when she mated. Then she mated two bears who SHARE her. The MC’s personality is only as deep as her bed sheets and the mates have none at all.

A Flash of Fang: Better than the first, but very much an intermediate book—half a lead-in to book 3 and half wrapping up book one (and maybe setting up a future/second generation book). I was irritated that she had to give up her life and position in order to have a happy future. How cliche that a woman can’t be powerful, have a happy marriage and children.

Ward of the Vampire, by Kallysten

Ward of the Vampire: An interesting start to a series, with a first person narrative I didn’t find too horrendously annoying. (I am not generally a first person POV fan.) Flawed however, as so many serials are, by just randomly ending without accomplishing anything notable.

My Reluctant Warden: Far, far too little progression for almost 100 pages and part of a serial; no where near enough to tempt me into the next installment. I forgave the ‘it only happened in a dream’ once, in the first episode, pulling it a second time was cheap and unsatisfying. Not to mention how very very jarring it was to go from the two of them clashing to the two of them being polite and flirtatious. I thought the woo-her-with-your-wealth trope was distasteful and again with the random endings.

Alpha Heat: A @#$&* cliffy! I cannot stress strongly enough how much I hate the influx of serials and the apparent acceptance of breaking a SINGLE story into several chunks that don’t have endings. Beyond that, this is standard erotica. A sexually exploratory and nympho-like virgin (of course and that’s not at all a contradiction apparently) gets kidnapped and then rescued. Sex ensues almost immediately, full of pointless bondage (the day after she’s been kidnaped, tied up and traumatized to boot) and sudden paranormal elements are thrown in at the last second. Oh, and her internal angle/devil talking to her all the time was horrendously intrusive to the narrative. Nothing in this was anything but bog standard.

Part 1 & 2: I’m afraid this taught me that, even when written well (which it is), I’m just not in to Roman slave/centurion erotica.

The Vampire Pendant: Nope, nope, nope, nope, nope, nope. Flat, overly simplistic writing, no tension—not even in the sex scenes (since they held conversations throughout them)—no chemistry, predictable, no character development or world-building, boring. I really wish I didn’t have the next one in the series to read.