I purchased a paperback copy of Marked, by Lacey Silks. 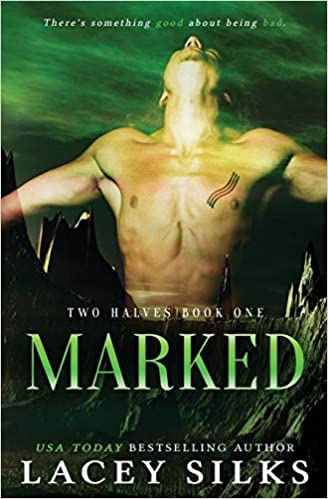 The underworld is stirring. And it’s calling out my name.

One kill. One life. One snap of a demon’s neck and I will be marked with a sphere. It will not only give me purpose and strength but it will also bind me and my sister to a demon lord, Aseret.

He’s killed our kin, disturbed the underworld’s resting souls and now he’s preparing to strike at the humans and vampires. If we don’t stop him, another genocide will ensue.

Gifted with abilities from our ancestors, we are the last shifters. Except my sister believes that our destiny is to bear the water mark instead.

Fortunately for me, every marking comes with a price. For me, her name is Xela. The sinfully sexy dark witch with secrets flips my world upside down. She takes hold of my heart, opening the door to the underworld.

After all, there’s something good about being bad.

Note: Marked is Book 1 in the Two Halves Series with a HFN ending. Contains mature themes and is suitable for adult audience only.

I’ll start by saying the writing here is fine. But beyond that I don’t have a lot of praise to lavish on it. I thought the whole thing too full of talking about doing things and not enough actual doing of things. And when the action finally started RIGHT AT THE END, the main characters were barely part of it. They were there, but not much more. The big fight the book was leading up to was quite anticlimactic.

Plus, Xander felt about 15-years-old but the book is full of sex. Not all of it was explicit but there was a lot of it. So much, in fact, that I wondered if a man really should be able to come that many times in a night. That was practically more of a fantasy element that the witches and shifters.

But my big complaint comes with that note you see in the last paragraph of the blurb. “Marked is Book 1 in the Two Halves Series with a HFN ending.” It is a lie on two fronts. Happy for now infers that the plot has reached some sort of plateau and the couple has reached a moment of happiness, even if it isn’t for ever. This book ends on a precipitous cliffhanger. There is no sense of anything being completed. This feels very much like half (if not a quarter) of a book. And as it’s only 143 pages long, there isn’t really any reason it couldn’t have continued. It didn’t stop at any sort of natural stopping point.

Second, and more importantly, HFN required the characters have found some sort of happiness, preferably together. This books ends with one character essentially dead (for the moment) and the other running away and knowing they can’t even look for the other for years. There is nothing about that that is happy, for now or otherwise. NOTHING. That sentence is a lie and an important one. I wouldn’t have purchased the book if I’d known how it would end…or not end.

Just about the only thing I enjoyed about this book was the laugh I got at the printing mishap on the cover. I read the blurb when I bought it. But then it took a little while to arrive and sat on my table for days. I didn’t really remember what it was about when I picked it up to read. So, I read the back of cover. OK. I dove in and nothing made sense. The character names were wrong, the plot wrong, it didn’t even feel like the same book.

So, I did a little googling and realized it didn’t feel like the same book because it’s not! 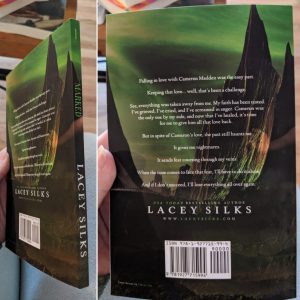 That blurd you see on the back of my copy of Marked belongs to Baby Me. I can’t imagine how printing the wrong blurb on a book happened, but I got a kick out of it and it made me laugh.

Since I’m talking about covers I’ll also mention that the man on the cover, who one assumes is Xander (the main character) is wearing the wrong mark in the wrong place. That will only make sense if you’ve read the book. But I noticed. Reader notice these things.