Cassandra Yorke‘s Mary, Everything was promoed on Sadie’s Spotlight and I was lucky enough to win a copy. Yes, since I have nothing to do with drawing winners, I absolutely enter the giveaways on the blog! 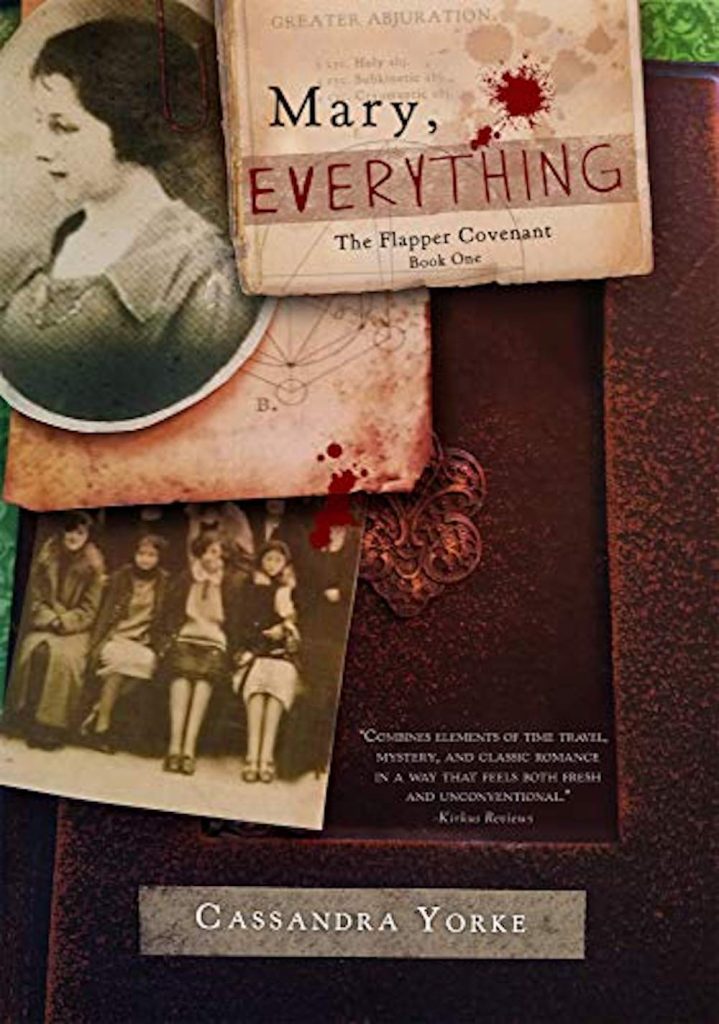 Courtney is a lonely undergrad at secluded Braddock College in 2004, working a drowsy summer job in the Archives. Assigned to a new project, she becomes haunted by a college yearbook from the 1920s – filled with familiar faces and memories of times she never experienced. A chance encounter with a mysterious girl named Sadie – dressed in long-outdated clothes – alters her reality. But if you were never meant to be born, that reality can expel you like an infection – or kill you outright. While Courtney struggles against forces she cannot comprehend, a psychopathic stalker smells blood and closes in for the kill.

Sadie, now in 1921, races against the clock to save her friend, joined by some remarkable allies – an American combat sorceress and veteran of World War I, an enigmatic professor who specializes in piercing the veil between realities, and two young women who insist they’re Courtney’s oldest friends – one of them even claiming to be her truest love.

Time is running out for Courtney, and a terrifying wilderness – haunted by the dead from centuries past – may hold the key to her salvation. But none who enter have ever returned…

This had some really interesting aspects that I very much enjoyed. The convoluted timeline, for example, makes your brain work for the reward. The book is set in 1921 and 2004, jumping between the two. But the 2004 scenes are essentially flashbacks (of a sort). Go ahead and get your head around that one. The writing is also quite lyrical at times and the editing clean.

But there were some things I could have done without. The book is pretty slow, especially in the beginning. So, as a reader, I really felt the 400+ pages. And I thought a lot of the climax too blunt for the light-fingered story up until that point.

For one, all the rape threats weren’t needed at all. (Notice, I said all. There were several from a variety of men). I do understand that this was intended in part to show how Courtney felt victimized by men, but that was established far earlier and needed no further evidence. The story would have been more interesting if the men had truly been enacting an evil for what they thought was a greater good. Already, as a reader, I knew to abhor them. Turning them ALL into pervy, would-be rapists was a cudgel the scenes didn’t need. True, I’d be happy never have to sit through another rape scene or rape threat in a book I read for entertainment ever again. But I would really, REALLY love it if authors would stop putting them in books that don’t need them as some sort of short-hand for “this is a bad guy.

Similarly, (in the cudgel sense), having both Courtney and Sadie suddenly and inexplicably become the strongest, most powerful, bad-assest chicks ever was too much too fast. There is so much subtly in the book until that point that it really stands out as a change in tone.

Having said all that, I don’t regret reading it. There is an interesting magic system and world here. It’s readable and thought provoking. Worth recommending.

2 thoughts on “Book Review: Mary, Everything – by Cassandra Yorke”