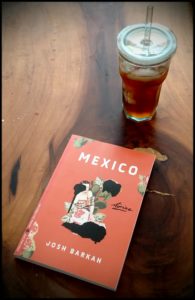 I won a paperback copy of Mexico, by Josh Barken, through Goodreads. I had hoped that it would be a book I count toward my #DiverseRomanceBingo challenge, being as it is set outside the US/UK, which is one of the points. But despite being set in Mexico, I do not believe I can count it toward the challenge.

Description from Goodreds:
A powerful, deeply original short story collection about people living in Mexico whose lives are turned upside down by the violence and chaos of the drug cartels

The characters in Josh Barkan’s remarkable story collection Mexico are ordinary people—everyday citizens, expats, and travelers visiting the country for their own reasons—who find themselves inexorably caught up in and impacted by the criminality and brutality of the Mexican cartels. In these pages readers will meet a tourist who is kidnapped off the street, a teacher whose students risk death if they fall in love with the wrong person, a chef who must cook for a gangster under pain of death, a plastic surgeon forced to alter a fugitive drug lord’s appearance, and many more compelling and memorable characters suddenly thrust into harrowing, life-changing situations. But for all that the characters in Mexico have their lives touched by crime, these are much more than simple “crime stories.” Rather, they are complicated and deeply human tales that touch on universally recognizable themes such as a parent’s desire to connect with their children, an idealistic belief in young love, and the struggle to maintain faith in a world full of hardship. *

Review:
Another reviewer said, “To be honest, I’m not sure Americans really need to hear more violent stories about Mexican crime and corruption. Mexico is a beautiful country that still has much to offer. In my opinion, this book concentrates too much on the negative and gives a narrow view of the country in general.” And while I went into the book knowing it was focused on members of the drug cartels, I very early on felt the same as this reviewer and by the end my opinion hadn’t changed.

Mexico has such a bright and varied culture and focusing so narrowly on this one aspect felt very much like reinforcing the painful stereotype that all Mexicans are involved in the violent drug trade—the women as victims and the men as jefes and/or henchmen. What’s more, I went in search of a bio of the author, thinking that my opinion might be altered if he is himself Mexican and writing from a place of emotion and familiarity. But he is a Yale educated, world traveling, white, American male and that just seems to make this writing feel even more like perpetrating a harmful stereotype from a place of safe privilege. When I started the book, I’d hoped Barkan would pull it off but I’m afraid he didn’t.

Further, to title the book just Mexico, as if it encompasses all of and only Mexico is adding insult to injury; especially since these aren’t stories about Mexicans. They’re stories about Americans in Mexico. But Americans, outsiders, who pretend to speak with an insiders’ knowledge and authority. They all naturally paint a bleak, unflattering picture of the country (with nothing positive to balance it out), in which corruption reigns supreme, cruelty is pervasive, women are dismissed and plenty of Mexicans die pointlessly, but never the American. Mexico and its people are just props for their northern neighbors to learn lessons and make decisions and act big. It felt VERY judgmental and appropriative to me. How did no one in the publishing process notice this? Were they all just too busy, as I imagine them, congratulating themselves and each other on writing/publishing gritty, down and dirty, important works about those poor unfortunates down south to pause and consider how nationalistic it might be?

As with any story collection some stories are better than others, but the fact that they all have a similar overriding factor, even as the themes and details differed, meant that I felt that repetition and eventually started to bore. Only one had any significant female characterization in it. All the others were full of men who were basically clones of one another. Many of them even had essentially the same transformative experience. The writing itself is ok, nothing to write home about, but not bad. It does tend toward pretension though, and there is a certain subtext of affluence to it that only adds to that impression. I do really like the cover, so there’s a positive note to end on.

*As a side note, it really annoys me when blurbs read more like reviews than book synopses. Maybe that’s just me though.