I’ve had Stacy Eaton‘s My Blood Runs Blue floating around in my Kindle Cloud since 2012. I’d basically forgotten about it, being burried in my TBR as it was. However, the audio versions of the series have apparently just come out and they were promoed on Sadie’s Spotlight. So, having been reminded the exist, and since I’ve been making a concerted effort to read some of my older ebooks lately, I dug this one out to try. 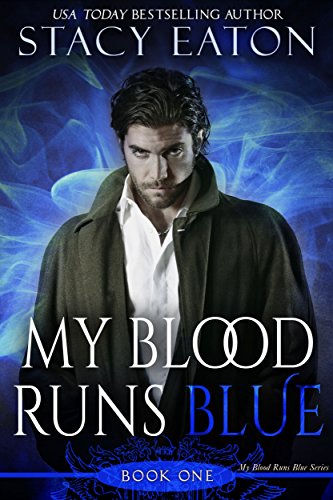 Officer Kristin Greene has always felt that something was missing from her life. Even though her job with the Fawn Hollow Township Police Department keeps her busy, she continues to feel as if there is something else out there she is meant to be doing. Kristin finds herself investigating a homicide where a young woman has had her throat ripped brutally out. As she begins to dig for the answers, she finds herself thrown into a world she never knew existed. When Julian and Alexander crash into her life, she finds herself being pulled into a love triangle that has been going on longer than she has been alive. Kristin in determine to figure out who they are and why they keep calling her Calista. Join Kristin as she fights to learn the truth about the recent murder, the two seductive men who have entered into her life and the real truth about herself in a suspenseful tale that weaves paranormal into to the realistic world of law enforcement.

This wasn’t horrible, but it didn’t particularly resonate with me. Some of what bothered me was objectively problematic, like some sloppy editing*. I noticed a couple word-order issues (such as “It had been a small gift to myself after had Trevor died.”) and missing letter mishaps (like ‘she’ being ‘he), and a lot of repeat words that just made for awkward reading. Things like:

When we were done talking, it was decided that Gabriel would stay at the house with the Taylors in case Damon came to the house after Gina Marie.

Hopefully the meeting tonight with Julian would give me some answers. Julian. Sigh…The thought of seeing Julian…

I walked into the restaurant and told them I was meeting someone. I told them I would wait by the bar until he arrived.

None of it was atrocious, but I noticed. I also thought names were used too often in dialogue, making it feel stiff.

A lot of what bothered me was subjectively problematic though—things I personally disliked, but might not bother others. One of my least favorite writing critiques is the dictate to show not tell. It’s not that it’s bad advice, I just hate it because it’s so often quoted that it’s lost any real meaning, IMO. But in this case I really felt it. This book is told, not shown and it meant I didn’t really connect with any of the characters.

What’s worse, a lot of the story is told in lengthy, disruptive flashbacks. So, I was never able to settle into the flow of the narrative. This was extremely exacerbated by the fact that almost every scene is seen from AT LEAST two POVs. So, you’d read scene from, say, Kristan’s POV and then go back in time and read the same scene from Alex and/or Julian’s POV. Notice the and/or. Yes, there were times you’d read it from all three. This made the narrative stutter painfully and I did not enjoy it. But it might not irritate others as badly.

I had a similar feeling about the romance aspect. The two men were in love with an idea and it had nothing to do with who Kristan actually was. They might as well have been fighting over a watch, for all the importance her, as a person, held. And the way she threw herself at whichever was in front of her meant I never formed an attachment to either man. I simply didn’t care who she chose. I might have been a little more interested if she’d chosen both. But that was clearly not on the table.

Lastly, I appreciated that Kristan really was strong and independent. But I hate author’s tenancy to make even the strongest female character fall unconscious repeatedly. Despite being an experienced cop, Kristan manages to trip over her own feet and knock herself out AND get knocked over and unconscious by a dog. This is a ‘frail female’ trope that can die as far as i am concerned.

I do actually have the next book in the series. (Well, it’s book 3, as 2 is a short story that I don’t have.) But I don’t plan to read it. I’ll keep it, in case I change my mind at some point. But right now, I’m not interested.

*Note/edit: Goodreads has a note that states, “My Blood Runs Blue was originally released in 2011. This 2014 version has been revised and re-edited.” My version predates 2014, but Amazon doesn’t show an update available to me, which would infer that I already have the updated version. So, I don’t know what that means for the editing comments. Make of it what you will.