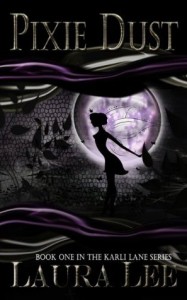 I picked up Laura Lee‘s Pixie Dust from the Amazon free list. At the time of posting, it was still free (probably permafree).

Description from Goodreads:
*A lonesome fairy with no clue how to wield her powerful magic.*A ruggedly handsome warlock torn between his past and his present.*A five hundred year old, sinfully sexy vampire who’s obsessed with solving the mystery of a particularly interesting bartender. Karli Lane is the only fairy left on the planet. Vampires had driven her race to near extinction, causing the others to return to their homeland over twenty years ago. Orphaned at a young age, she was forced to hide her identity in a world full of exposed supernaturals. Facing her upcoming immortality, her life has become a complicated mess. A new employer and a gruesome murder bring two incredibly complex men into her life, making matters worse. She finds herself riding a non-stop emotional roller coaster while trying to figure out who she is, how to control her powers, and most importantly, how to stay alive.

Review:
Weak, very weak; that’s my assessment of this drivel. That’s right I said it. I usually try really hard not to say insulting things. I know it’s extremely hard to write even a weak book. I do. I’m sympathetic. But just about every aspect of this book and its main character grated on me.

Then the movie comparisons started…and never stopped. It’s a poor way to describe something or provide familiarity, but also a pet peeve of mine. Both because I no longer own a television or bother with Hollywood (so I often don’t get the references and kind of resent the assumption that everyone will) and because it dates a book quickly. Plus, it just clutters up the narrative.

Just about the time I’d ground my teeth and persuaded myself to stick with it. I was blindsided by a series of instant and baseless attitude and character changes. One second two characters are cocky and hating each-other, the next throwing themselves at one another in sexual heat, then suddenly all shy and hesitant. So, enemies to lovers to touchingly sweet love in about an hour. Oh, and this happened more than once.

About that touching, all consuming love…There were two of them, for starters. And while I love a little ménage here and there, this wasn’t that. It wasn’t even a love triangle. It was just two men who for no apparent reason suddenly fell madly in love with one woman (on sight), were willing to do anything for her, and apparently didn’t even mind the other. Hmm, I guess maybe that could have been a little further developed…maybe at all.

Even more confounding than the sudden, obsessive love of two sexy, powerful men who didn’t know her from Eve was the question of why/how the vampire managed to overcome the bloodlust that plagued EVERY VAMPIRE THROUGHOUT DOCUMENTED HISTORY as if it was nothing at all. No explanation provided or even attempted. And if that wasn’t enough to make me gnash my teeth, the question of why she would put herself into the position to find out he wasn’t going to kill her immediately is. Hello stupid!

Could she really be that stupid? Yep, ’cause next Ms. Clutso sliced herself open in front of a vampire and let him lick it clean. (You know those vampires who almost exterminated her entire race for their blood, yeah, them.) Really. Not too careful, our MC. She basically approached Too Stupid To Live territory and camped out there.

Then there was the juvenile shouting, yelling, screaming, etc. Maybe this is just a symptom of the verbs the author chose to use, but it made everyone (but especially Karli) feel overly dramatic and tween-angsty. Especially since more often than not the circumstances didn’t call for all the extra emotion. For example, she Karli didn’t want to have a conversation with Vance (a perfectly reasonable one, BTW), so she screamed at him, slammed doors, tried to throw him out and eventually threw herself into idiotic danger with a smirk. Someone just go ahead and shoot this woman for me, please.

Add to all that the obvious attempts to add pointless titillation and I’m darned near toasted. As an example, one night after meeting Karli the detective asks her to accompany him to seek out a suspect (obviously proper police procedure, that). He then takes her to a sex-bar. This was pointless for anything but to showcase her apparent naiveté and allow for a whole boatload of sexual snippets. It was also almost too cliché (and over-used in PNR) to bear.

Plus, in an atmosphere of complete sexual nihilism there isn’t a single non-hetero act to be seen and the whole scene seemed oddly male-centric, making even the women seeking their own pleasure feel like sex workers instead of equal-part satyric. Seems unlikely and mildly insulting.

This theme of pointless titillation continued in the make out sessions that leapt out of no where, but never actually went anywhere. This irked the hell out of me because they were so jarring, but also because it made the book feel very stop-start. Not to mention there was a whole heck of a lot of internal monologue-like fantasies, posturing, and petting and NO ACTUAL SEX. Seriously?!

Then I had to tolerate all of Leo’s pet names: sweets, my sweet, dearest, my dear, love, my love, etc. (There were an endless supply of them.) This drives me crazy in general. I find them belittling. But here they were especially annoying since he and Karli had no relationship yet for him to so casually, use them. It felt false.

The writing itself was fine. I found it a little repetitive at times, as reader saw events and then characters relate that event to others. There were also a number of infodumps that made things feel clunky. But beyond my basic loathing for first person points of view the writing wasn’t too bad.

To wrap this sucker up, I disliked this book. I hated the main character. I found her a weepy, bratty, juvenile woman. I probably would have liked the men if they’d been developed at all and if I understood where their obsession for Karli came from. But they weren’t and I didn’t. But as much as I disliked it all, it’s almost all personal preference sorts of material. The nuts and bolts are there and another reader might (does, since there are plenty of great reviews of Pixie Dust out there) really enjoy it. Just not me, not me at all.