In December of last year, I picked up a freebie copy of Draekon Conqueror (by Lee Savino and Lili Zander). Only later to discover it’s book two in a series. (Yeah, I don’t always pay enough attention. I know.) In March of this year, book one Draekon Warrior popped up in my feed as a freebie. So, I grabbed it too.

I chose to read them now as a little bit of a cheat. You see, I need a Z for my yearly alphabet challenge—where I read at least one book by an author with a last name for each letter of the alphabet. I’m swapping the order of Savino and Zander and calling this my Z…or at least a Z. 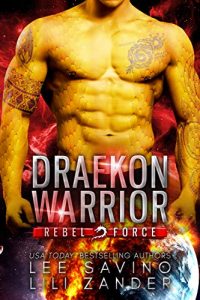 Captured in space. Imprisoned. Sold to the highest bidder.
But my biggest problem is the bossy, aggravating, impossible, alien who’s supposed to rescue me.

The bossy alien I kissed.

Kadir is dangerous. I’ve seen him fight and his body is littered with scars. He’s a soldier. A warrior. And when he loses control, he turns into a big scary dragon and breathes fire.

Everyone’s terrified of him. I’m not. No, call me the biggest fool in the galaxy, because I’m attracted to the big jerk.

When I first met the small human I was sent to rescue, she punched me in the jaw.

And broke her wrist in the process. Irrational woman.

Then she insists that the two of us set out immediately to find her missing friend.

No, what I have to do is get Alice Hernandez to safety.

Fragile, yet so brave.

Everything I can’t let myself have.

When the scientists tortured me, they broke me. And when Alice finds out the truth about the fearsome, raging dragon inside me, I will lose her.

You know, I’ve seen quite a lot of discourse lately on why people enjoy monster romance/smut. And a lot of it comes down to how monsters in such books are often bigger, scarier, more powerful than the female main character. But they are also almost always very obviously conscious of this fact and go to great lengths and courtesies to reduce themselves as perceived threats…to mitigate any risk they pose. They’re often super conscientious about consent and big ol’ cinnamon rolls underneath the scary exterior. (And how many parallels are there to real world men and their perceived threats in that paragraph, hmmm?)

Kadir is honestly too humanoid to qualify as a ‘monster,’ but he shares many of those same qualities. Not least of which is seeing himself and feeling himself perceived as a monster. And he is every bit as careful and considerate of Alice as any monster, even before he sees her as mate material and the real romance starts. It’s sweet.

The story isn’t complicated. There’s no more to it than any number of other alien romances. But it’s well done and sweet enough that I’m happy to have book two on my kindle. 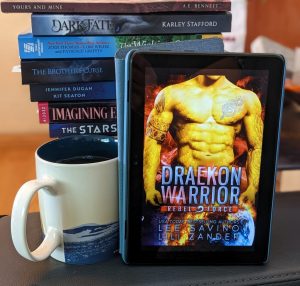 I did at some point realize that this must be a spin-off series, as characters started showing up that were obviously pairings from other book. Turns out it’s a spin-off of the Dragons In Exile series. However, as much as this normally annoys me, I have to say this one stood alone well enough that I noticed but wasn’t too bothered. I didn’t feel like I was missing too much information having not read the previous series. There were also a couple minor consistency mishaps. But all in all, I enjoyed this. 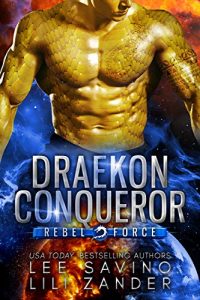 I’ve lived an eternity. I’ve killed thousands. Destroyed worlds. I thought I’d seen everything. I didn’t think there was anything left in the galaxy that could surprise me.

Then I met her. Lani Dennison. A human woman. My mate.

Zorahan scientists tortured her. I killed them, of course.
Okaki pirates abducted her. I tracked them down and infiltrated their ship. Routine stuff. Nothing that presented a problem to a trained soldier that could shift into a fire-breathing dragon.

I expected her to be smart. You’d have to be, to survive the Okaki pirates.

I enjoyed this for many of the same reasons I enjoyed the first book. The Draekon is marvelously solicitous to the human mate. Everyone is careful about consent. There aren’t any needless misunderstandings or mind games. Everyone is delightedly straight forward.

But I admit that I didn’t enjoy it quite as much as book one. I didn’t find Ruhan quite as charismatic a lead male. Sure, he’s cocky and cock-sure to cover his brokenness, which hits you in the feels. But I just didn’t like 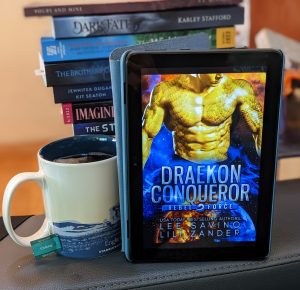 him as much as I did Kadir from the previous book. That’s not to say I didn’t like him, just not as much. Similarly, I didn’t find Lani as multifaceted as Alice. I liked her. But I didn’t think she had quite the depth.

But the real question is whether I would read another book in the series and I would. In fact, book three, which involves pirates, looks especially tempting. I don’t have it on my Kindle yet. But I look forward to reading it in the future.

In Between the Pages: Draekon Series Reviews