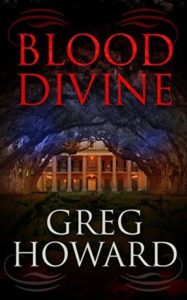 I received a copy of Blood Divine, by Greg Howard, from Netgalley.

Description from Goodreads:
Cooper Causey spent a lifetime eluding the demons of his youth and suppressing the destructive power inside him. But a disconcerting voicemail lures Cooper back home to the coast of South Carolina and to Warfield—the deserted plantation where his darkness first awakened. While searching for his missing grandmother, Cooper uncovers the truth about his ancestry and becomes a pawn in an ancient war between two supernatural races. In order to protect the only man he’s ever loved, Cooper must embrace the dark power threatening to consume him and choose sides in a deadly war between the righteous and the fallen.

Review:
I enjoyed this. I liked Cooper and Randy, but the book itself was a bit weak. I never felt the chemistry between Cooper and the man he was supposed to love. It was all based on a past, off-page crush. And I never believed that if they loved each-other they would have kept such distance. I disliked that Cooper went from knowing nothing to being all but all-powerful with no training (very deus ex machina). I felt cheated that the evil villain never seemed to actually do anything, even when threatened, and he was defeated easily, without putting up a fight. (I don’t consider that a spoiler. Did anyone think the good guys wouldn’t win?) And I didn’t believe that his grandmother would keep her secret and let him think he wasn’t safe to come out for his whole life.

All in all, it was a fine book to read for simple amusement. The writing is very readable and the plot does keep up a good clip. But it wasn’t anything super special.