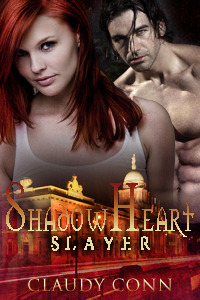 Descriptions:
Her name is Nikki Walker, and she is a vampire slayer. She never thought she would have to use her slayer powers…but she does.

She is on the trail of an ancient and secretive vampire called Deadly Moon, and Nikki wants to destroy her. She has her reasons.

His name is Damon Drummond who some of you have met before, and already know that he is a hunk of an unusual vampire. He is bent on keeping Nikki away from Deadly Moon.

The sociopath vampire, WB, who had been Pentim Rawley’s right hand man has taken over the Pentim clan, and is turning out to be even more of a problem than his predecessor had been. In fact, if someone doesn’t do something soon…Dublin will go dark under his power, and other cities will follow.

Damon and Nikki are on opposite sides. He is a potent vampire–she is a skilled and powerful vampire slayer. Problem right there…but, when they look at each other, sparks of all kinds fly. Too much stands between them. He will live forever…she will not…and yet…

Review:
Hmmm…From the blurb and the precedent set in book one (Shadow Love: Stalkers) I expected this book to have (or at least aim for) a deep, brooding vampire and a kick-ass slayer/heroine. Certainly Damon was just so in the last book. For a little while, in the beginning, that’s what I got too.

Then everything took a turn for the Twilight Zone. Suddenly there were, not only vampires, but demons, hybrids, and inter-dimensional monsters in an enchanted wood, which just happened to surround a magical castle. It was, however, when I reached the kindly, white bearded wizard a la Fantasia, in the blue, sparkly, conical hat, silken robes and Harry-Potter-like wand that I had a fairly serious WTF moment. I only became more confused as witches, warlocks and fae were later thrown into the fray.

It was like the book completely lost focus for a little while, drifted and then simply picked up in some quixotic fairytale instead of a PNR vampire novel when it reestablished itself. I was left dazed and confused, until I shifted into irritated and disappointed. I didn’t set out to read a fairytale and there was no warning that it was what I was getting into.

What’s more, Nikki went from the hard-nosed, independent slayer of the first couple chapters to a sweet, polite, girl next door with a propensity to hug people and kiss the cheeks of affable old men. Talk about a personality 180°. I wanted to drop the book right there at 50%, but I forced myself on so I wouldn’t have to DNF.

I try really hard to find at least a few good things to say about a book and I see from other reviews that people like it. So, I’ll happily admit that this was perhaps a mismatch of reader and book. But I was seriously disappointed. Both because the story I ended up reading in no way resembled the one I set out for and because I thought it wasn’t particularly well put together. *cringe*sorry**

The narrative was repetitive. For example, WB’s feelings and thoughts about Clara were related just about every time they were in the same room. The same kind of thing can be said for both Nikki and Damon. We’re told what they think of the other again and again and again without it changing much until the end. Then it just becomes rather staid, rushed sex scenes.

The narrative felt quite stiff, with characters too often using names and endearments in conversation and even frequently using full names where one would suffice. At first I thought this was a certain character’s habit, but then others did it too. There were also periods where people seemed to stop using contractions, leaving everyone sounding oddly formal all of the time.

Plus, I just found myself cringing over some things. For example, I found the whole “shifted into vampire speed” or “put on the slayer speed” cheesy beyond imagination. Maybe because it was used so often, but mostly because I imagined them shifting gears, like in a car.

My main complaint, however, was that like in the previous book, the author set up one primary plot (in this case hunting down the killer of her brother) and then completely ignored it for most of the book, while unrelated distractions were thrown at the main character and reader. This left the whole thing feeling fragmented.

I don’t want to be mean here. I truly appreciate how hard writing a book is and for a different reader maybe this one will be a winner. It was, after all, very creative and imaginative, but I’ve finished it now and am still kinda reeling in a state of perpetual WTF. I had such high hopes for the dark and mysterious Damon too. They didn’t pan out.