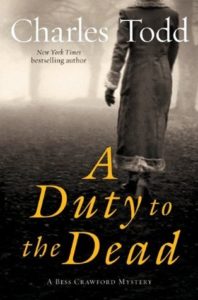 I borrowed an audio edition of Charles Todd‘s A Duty to the Dead from my local library.

Description from Goodreads:
The daughter of a distinguished soldier‚ Bess Crawford follows in his footsteps and signs up to go overseas as a nurse during the Great War‚ helping to deal with the many wounded. There‚ serving on a hospital ship‚ she makes a promise to a dying young lieutenant to take a message to his brother‚ Jonathan Graham: “Tell Jonathan that I lied. I did it for Mother′s sake. But it has to be set right.” Later‚ when her ship is sunk by a mine and she′s sidelined by a broken arm‚ Bess returns home to England‚ determined to fulfill her promise.

It′s not so easy‚ however. She travels to the village in Kent where the Grahams live and passes on to Jonathan his brother′s plea. Oddly‚ neither Jonathan‚ his mother‚ nor his younger brother admit to knowing what the message means. Then Bess learns that there′s another brother‚ incarcerated in a lunatic asylum since the age of 14 when he was accused of brutally murdering a housemaid.

Bess rightly guesses that the dying soldier′s last words had something to do with the fourth brother. Because the family seems unwilling to do anything‚ she decides that she will investigate. It′s her own duty to the dead.

Review:
I found this entertaining enough. Bess was a clever, good hearted soul who was willing to stick her nose in all the places it doesn’t belong and I enjoyed her. I found the writing clear and readable and the plot engaging. I especially appreciated that despite opportunity and a female lead it never became a romance.

The murder was rather easy to figure out, but it kept me interested until the end to see if I was right. I did feel a little slighted at the end.  It’s a bit of a reveal and run. None of the people who deserve it get their true comeuppance (at least not on page) and the reader never even sees them even be confronted. But all in all, I was pleased.

**As an additional plus, I notice there is a Goodreads giveaway running for a copy of the book (at the time of posting).**