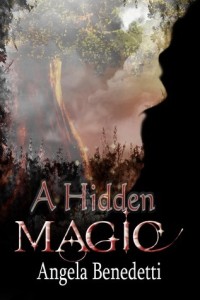 I got a copy of Angela Benedetti‘s A Hidden Magic when it was available as a Christmas freebie from the publisher.

Description from Goodreads:
Fey incursions into the mortal world have been on the rise, and Paul MacAllister’s trying to figure out what the king of the local Elven enclave Under the Hill is up to and how to stop it. Rory Ellison was caught up in one of those attacks and nearly killed by a gang of goblins. He doesn’t believe they were real, though, and is resisting anything Paul might say to the contrary.

Normally Paul would be willing to let Rory go his own way, at least until he’s taken care of more immediate business. But Rory has a particularly rare gift, one the Elven king needs to have under his control in order to carry out his plan. Keeping Rory away from the fey who will use him, to death if necessary, means protecting him night and day, whether Rory agrees or not.

The issue I finished the book with is that nothing of any significance happens in it. It’s not that nothing happens—they put this fire out, put that fire out, defend against this attack, someone gets kidnapped and retrieved, things happen—but nothing of significance happens, nothing that would qualify as a broad, over-arching plot beyond two men meet amongst all this other stuff and kinda like each-other. As a result, I was never grabbed by the book. I liked it ok, but was never hugely invested in it.

Similarly, I liked the characters (the main ones and the side ones) but the reader never gets to know them. There isn’t a lot of character development and they remain shallow throughout the book. Again, I never felt invested in them.

Roughly, the same could be said for world building. All only ok. So, while not a bad book, by any means, also not a great book. It served it’s purpose of entertaining me for a few hours, but not a lot more.