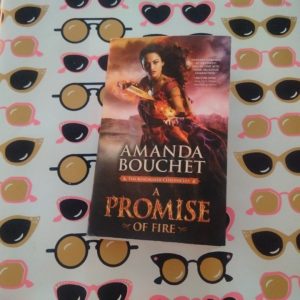 I won a copy of Amanda Bouchet‘s A Promise of Fire from Night Owl Reviews.

Description from Goodreads:
Catalia “Cat” Fisa is a powerful clairvoyant known as the Kingmaker. This smart-mouthed soothsayer has no interest in her powers and would much rather fly under the radar, far from the clutches of her homicidal mother. But when an ambitious warlord captures her, she may not have a choice…

Griffin is intent on bringing peace to his newly conquered realm in the magic-deprived south. When he discovers Cat is the Kingmaker, he abducts her. But Cat will do everything in her power to avoid her dangerous destiny and battle her captor at every turn. Although up for the battle, Griffin would prefer for Cat to help his people willingly, and he’s ready to do whatever it takes to coax her…even if that means falling in love with her.

Review:
Oh man, I have SUCH disappointment about this book. Authors, could you explain to me why you would set up a whole world around a female character, give her god-like powers, training, skill and intelligence, then infantilize her and allow her to be overpowered by a man for an ENTIRE book? Why? WHY?!

Cat seemed to have boundless powers that develop as needed—very deus ex machina of the moment sort of thing. She defeated dragons, killed thirty soldiers with a single breath, had prophetic dreams, was a soothsayer, was protected by gods (plural). Yet, in the face of one man she’s helpless. What’s more, she’s also presented as unreasonable and needlessly angry that he kidnapped her. Literally, she asked why he expected her to accept him and her situation and he said, “I expected you to be reasonable” and she internally agreed. Excuse me? He abducted her, unknowingly exposed her, threatened her friends and adoptive family. I’m pretty sure surliness and trying to escape IS the reasonable response. And she is kidnapped in the very beginning, so she’s basically a helpless captive for the whole book.

So, I’m angry that the supposedly strong female was basically, ‘strong, but not as strong as the men’ but I died a little with each cliché that was thrown in. The scene where she got accidentally high as a result of her own actions and lets all her guards down, acting inviting and sexy, but being “happy like a child” and needing protection. The one where the scorned woman went homicidal. The one where ‘her body betrayed her’ by being attracted to the man who kidnapped her. The ones where she had to be a virgin because good heroines never have sex with anyone but their hero. My god, this book was practically a cobbled together series of romantic fantasy clichés. It was also repetitive as hell.

The writing, it was fine and I appreciated that when Cat’s curvy body was compared to her thin counterpart she was the one found most appealing, on more than one occasion. Those who don’t mind seeing their women dominated by their romantic lead will probably enjoy it. I personally want to burn the darned thing, but instead I’ll put it in my Little Free Library and hopefully someone in the neighborhood will enjoy it more than me.