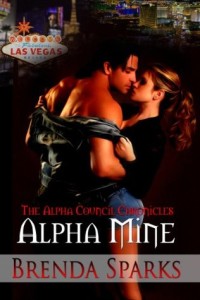 I picked up a copy of Alpha Mine, by Brenda Sparks, at Amazon.  I read it as part of my Alpha Reading Challenge.

Description from Goodreads:
In the shadows of the night, there exists a band of warriors–a group of vampires, known as the Alpha Council. Their formidable leader, Stephan von Haas, has vowed to protect not only his kind but the humans existing alongside them. His duty comes before all else–until a sassy blonde saunters into his life.

When a sensual, dark-haired stranger walks into Katrina Spencer’s life, he stirs her deepest desires and sweeps her into a world beyond her wildest dreams. But when Katrina is targeted by Stephan’s enemies, reality shifts into something violent and deadly, as she is thrust into a realm where vampires stalk the shadows and vengeance is coming for her.

Together they will confront an extraordinary destiny of peril, passion, and dark pleasures. But when one horrid mistake brings retribution, their love may pay the price.

Review:
I had a very visceral reaction to the end of this book. It went something like this: I turned off my kindle, tossed it off to the side, took a deep breath and said, out loud, “Thank God it’s finally finished!” Without consciously realizing I was doing, about 30% into the novel, I started checking my progress bar and being repeatedly shocked and dismayed to find I was only 30%, 45%, 60%, 75%, etc done. This novel seemed to go on forever and not in a good way.

I’ll be fair and say the actual writing isn’t bad and the dialogue is readable. It’s not the hot mess some indie/SP books I’ve read are. But it REALLY needed and editor that would have encouraged the author to cut about a third of it out, tighten it up a lot, and solidify the characters to match the tone of the book. Because the book is too long, too many of its pages are dedicated to unimportant, non-plot relevant events and the characters, who are supposed to be badassed act like children. They play charades, dress up for Halloween and giggle a lot. This created a jarring and unpleasant collision of innocent child-like scenes followed by rape scenes, which I assume were the author’s attempt to be gritty and edgy. (It wasn’t.)

And I’d like to address these rape scenes, which if I’m fair, were more like rape references. But for the point I’m making is same-same. I have no problem encountering rape in a book if it serves a purpose in the plot. But I have found in many, many books that authors use rape as a shortcut to clumsily telegraph to the reader, “This character is exceptionally bad.” This offends me both as a woman who is just tired of having rape thrown in such a high proportion of romance/erotic novels but also as a reader who is just tired of encountering the same writing over and over and over again.

I promise there are millions of other ways for men to be bad men. At this point in my reading career, when I encounter the sort of rape used here in this book, I interpret it as a sign that an author has been lazy and refused to think any farther than, “Here’s a trope that you will effortlessly recognize and know what it means.” Telling your reader you are lazy is not a good thing.

This is especially true in Alpha Mine, because the rapes contributed NOTHING to the plot. The character committing them was a minor side character, a minion. Establishing his evilness was beside the point. In fact, it countered the point, as it caused him to overshadow the true villain. He was later disposed of in an offhand manner, further establishing him as an unimportant character in the book. Thus, further emphasizing that his need to be established as evil was unimportant and therefore his raping of at least two women unneeded in the book.

Thus, to make my point clear, the author included two raped woman for absolutely no reason at all. Worse than that, for a reason that served to make the book even weaker than it already was. While rape is just one more thing that could show up in a book, much like murder or milkshakes or mad cows, it is extremely overused and should be considered before being included in a story. Sparks has just spectacularly demonstrated why.

So, I was put off on several fronts by this book. The plot was too loose, the characters undeveloped and shallow, the tone contradictory, the female nothing more than an object that spurs the men to action, and inordinate amount of time was dedicated to what sleazy outfit she was wearing and how men reacted to her in it, there was magic sex that fixed a problem that the effort of five people couldn’t solve, the conclusion was anticlimactic and the whole thing was too long in general. This book has many good reviews. People like it. I’m just not one of them.