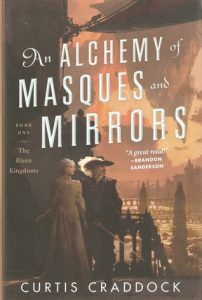 I borrowed a copy of Curtis Craddock‘s An Alchemy of Masques and Mirrors from my local library.

Description from Goodreads:
In a world of soaring continents and bottomless skies, where a burgeoning new science lifts skyships into the cloud-strewn heights and ancient blood-borne sorceries cling to a fading glory, Princess Isabelle des Zephyrs is about to be married to a man she has barely heard of, the second son of a dying king in an empire collapsing into civil war.

Born without the sorcery that is her birthright but with a perspicacious intellect, Isabelle believes her marriage will stave off disastrous conflict and bring her opportunity and influence. But the last two women betrothed to this prince were murdered, and a sorcerer-assassin is bent on making Isabelle the third. Aided and defended by her loyal musketeer, Jean-Claude, Isabelle plunges into a great maze of prophecy, intrigue, and betrayal, where everyone wears masks of glamour and lies. Step by dangerous step, she unravels the lies of her enemies and discovers a truth more perilous than any deception.

Review:
This is my first book of 2018 and I think I made a good choice. To be fair, I picked it up because it is labeled book one AND the author’s bio says this is his first book. So, I was guaranteed not to yet again pick up a first book, only to discover that it’s first in a spin off. *happy sigh*

I greatly enjoyed it. It is much more a book of court machinations than the magic and steampunk I was expecting, but I still liked it. I liked the repartee and the humor. I liked Isabelle and her Musketeer. Though he did seem to happily dedicate his life to her on a mere whim, and I wondered why. I liked the intrigue and mystery. I liked the ending, though it all came together a little conveniently.

To be honest, I notices several missing letters (things like ‘they’ written as ‘the’), but mostly the editing was pretty good as was the writing. It’s readable, reliable, rational, relatable and several rounds starting with the letter R. I can’t wait for more of Craddock’s work.