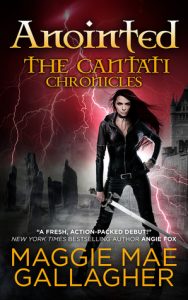 I found a signed copy of Maggie Mae Gallagher‘s Anointed

at a secondhand store. We all know how I love signed books, so I bought it.

Description from Goodreads:
My name is Alana Devereaux. I enjoy the simple things in life, walks in the park, sky gazing, and ripping a demon’s heart out though its chest. I am a demon slayer, the last of my kind, and I have been sent back through time to save your world.

How am I doing so far? My time travel went haywire, all the signs I needed to stop the prophecy have passed, and the only way I can save my world is by keeping yours from ending. Then there’s Gaelen, most days I want to deck him. He hides his true motives and if it was not for the intel he had, I would be rid of him. Any day in my life without a demon attack is a good day; I haven’t had a whole lot of those lately. The only problem is, if I don’t stop the Mutari, this world will burn.

Review:
So, this was not very good. I won’t go so far as to say horrible, but not very good. It’s full of plot holes (and a pretty problematic paradox), both the heroine and hero are unlikable, assumptions are made and not supported, and there is no real conclusion.

It was not liking Alana or Gaelen that really clinched it for me. Her entire personality is contrary, angry, full of bluster, and distrust. I promise, authors, a female character can be touch without being so prickly as to be nothing but solid unpleasantness. He is abusive and possessive. Somehow these two horrible people fall in love with each other, though I never saw why or how…or really when. It just suddenly was.

Plus, I want my badass female characters to be badass. Alana was at best inconsistent. Taking on 60 demons one minute and not able to beat 6 men the next. She was constantly making threats she couldn’t or wouldn’t, certainly didn’t follow through with. She was constantly demanding information she was never given and she was constantly given orders she didn’t like, but followed. In the end, she felt like a child rebelling against a parent, but doing as told.

Then there was the author’s use of rape. It a much overused method authors use when they want to make sure readers know a man is really bad. Not just bad, but really bad. And they (the authors) prance out the rape threats. It’s so overdone as to be boring and totally infuriating. Rape should be so much more than a plot device!

Speaking of plot devices, there were far too many major coincidences. Alana developed abilities as needed and, at one point, when locked in a room (by someone who was going to rape her, but was conveniently interrupted by a knock at the door and had to leave) she found he’d dropped the key on the floor! Yes, the author went there.

So, I said it was bad, but not horrible. In writing this review, I think I talked myself into saying this book is horrible. I will not be continuing the series.