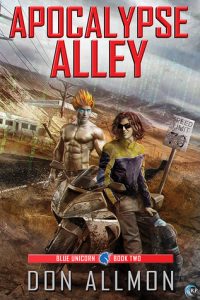 I received a copy of Don Allmon‘s Apocalypse Alley

through Netgalley. I reviewed book one, The Glamour Thieves, here.

Description from Goodreads:
Home from a six-month assignment to war-torn East Asia, genetically engineered supersoldier Noah “Comet” Wu just wants to kick back, share a beer, and talk shit with his best friend, JT. But JT’s home has been shot up like a war zone, and his friend has gone missing.

Comet’s only lead is a smart-mouthed criminal he finds amid the mess. His name’s Buzz Howdy. He’s a con man and a hacker and deserves to be in jail. Or in handcuffs, at least. The only thing the two have in common is JT. Unless you count the steamy glances they’re sneaking at one another. They have those in common too. But that just makes Comet all the more wary.

Despite their mutual distrust, they’ll have to work together to rescue JT before a cyborg assassin gets to him first. Racing down a miserable stretch of road called Apocalypse Alley, they must dodge radioactive spiders, a lonely cannibal, and a killer Buick. They also try to dodge each other. That last bit doesn’t work out so well.

Review:
Honestly, I didn’t love this one like I did The Glamour Thieves

. I liked it just fine, but there was no love. I still got a thrill out of Allmon’s world and there is a lot of humor in the book that tickled me and I really like the writing style, but the romance literally goes from gun-to-the-head-of-a-stranger to in love, in less than six hours. There is just no way to make that work for me, even if the two go through some heavy stuff together. Almost especially if they go through a storm together, because then you have to sort what feelings are just leftover from the experience and what is real. The book doesn’t even touch on that little psychological reality.

Plus, the book just never stops. There are no rest points in the narrative and I, personally, needed them. And lastly JT and Austin are hardly in the book and I missed them.

Having said all that, I’ll still be on board for book three. This might not have shown like the star book one was, but it is still a fun read and I look forward to more of Allmon’s work.