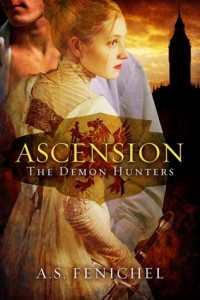 I picked up a copy of A. S. Fenichel‘s Ascension from the Amazon free list.

Lord Gabriel Thurston returns home from war to find his fiancée is not the sweet young girl he left behind. She’s grown into a mysterious woman who guards her dark secrets well. When he sees her sneaking away from a ball, he’s convinced it’s for a lover’s rendezvous. Following her to London’s slums, Gabriel watches in horror as his fiancée ruthlessly slay a man.

Lady Belinda Carlisle’s only concern was her dress for the next ball—until demons nearly killed her and changed everything. A lady by day, and a demon hunter by night, she knows where her duty lies. Ending her betrothal is the best way to protect Gabriel from death by a demon’s hand.

Gabriel soon realizes, like him, Belinda has been fighting for her country. He joins in the fight, determined to show her that their love can endure, stronger than ever.

Review:
I will warn you in advance that this ‘review’ is going to be at least half rant, and not of the fangirl variety.

For me this book was a fail, fail, fail. It is so completely anachronistic as to be all but unreadable. Honestly, the only reason I made it to the end (and it was often in doubt that I would) was so that I could write a complete review of it.

Lets start with the sex, shall we, since there was so much more than the plot could reasonably support. It was a painful exercise in contradictions. You had the expected wide-eyed, innocent virgin who asked some version of ‘what was that?’ when she had an orgasm and inquires if a man’s will too—so, essentially the cliché, child-like lack of knowledge about her own body. Gag. But she also acknowledged and was familiar with the feelings in her stomach and loins, the pooling of heat, bla, bla, bla (this tended to happen randomly and in completely non-erotic settings, such that it felt quite jarring) and she was completely without shame, embarrassment or timidity when it came to sex. I’m pretty sure a character needs to be one or the other, both doesn’t jell.

Nor his for that matter, there was no reason to think he, who’d also been raised in the same sexually repressed era, would look at his virginal (ok, they’d had sex once) fiancé and think nothing of (and expect her to think nothing of) shoving a finger up her ass. Seriously!

And even if you remove all of the issues around the time period’s insistence on avoiding temptation of all sorts (which means all of her comfort with being naked in front of him was questionable) there is still the simple human issue of doing something new and theoretically unfamiliar for the first time. Shouldn’t she be nervous or uncertain in her responses or concerned with her reputation (we’re both told and shown that she tries to maintain it outside of the Company)? Nope, not even once. Not even when (I assume) he broke through her hymn. (Not that that was mentioned or anything, wouldn’t want any realism to interfere or anything.)

And someone explain to me how her willingness to have sex with him proved to him that she hadn’t allowed herself to “be ruined” during his time in France. I don’t follow the logic.

I’m sorry author, you simply can’t write a novel with period costumes and setting but modern mores and expect it to fly. No, nope not at all. It’s painful and off-putting, to say it nicely.

Additionally, the attempt at period dialogue simply read as stiff and overly formal. Names and endearments, such as My Dear, were used too frequently and the lack of contractions chaffed. The writing itself is simplistic and not particular engaging.

Ok, so, moving past the simple fact that this book did not settle into the time period of it’s setting and thus felt arrogant and as if it was making claims moral superior, the plot itself was weak. There was little character development and the plot basically boiled down to, ‘you’ve been told Belinda is the best at everything, so obviously the demons want her.’ All that sex and relationship talk (which is about 2/3 of the book) got in the way of what little plot progression there was. And what there was was incredibly predictable.

The book was also repetitive. The reader is told the same thing multiple times and I swear Gabriel and Belinda had the marriage talk about 30 times. Lastly, the editing could use some attention.

Just about the only praise I have for this book is that Gabriel was really sweet and the author was obviously trying to create a strong female character (a fact that I appreciate).