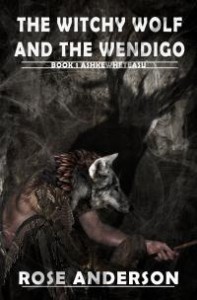 I downloaded a copy of Rose Anderson‘s Ashkewheteasu from the Amazon free list.

Description from Goodreads:
What does an immortal Native American shaman do when the grave he’s sworn to watch over for all eternity disappears under urban development?

His purpose of guarding his wife’s burial mound is gone, Ashkewheteasu seeks to end his immortal existence. In his despair, Ash assumes the form of a wolf and steps in front of a moving car and into the life of Dr. Olivia “Livie” Rosalini. The veterinarian saves the animal’s life, and in the process saves the man within. Livie has no idea the wolfish dog she’s taken into her home and grows to love is a magical being seeking to win her heart as a man.

While Ash is learning a new world filled with new love, friendship, and happiness, an old menace makes plans to steal it all away; just as he had 3000 years before.

Review:
This book and I just generally didn’t get along. There is, I’ve found, a certain subset of romances, especially common in the SP/Indie realm in which all characters except for the villain are Mary Sues and Gary Stues, every single one of them. They tend to speak in full, contractionless sentences and use each other’s names/titles too often to feel natural. It reads as if they should all be talking in gentle falsettos, as if to a child. They have intense and often anchorless emotions that they or the narrator openly declare and they tend to hug a lot.

I’m serious here. Think about how often you’ve encountered this same combination in books. The thing is, I hate this subset of romances. I’m not sure if this is something authors purposefully do or if it’s a failure to produce something more believable. It’s gotten to the point that I evaluate all hugs in a book to see if they are part of this pattern. Not all are, obviously, but they sure are in this book.

Everyone except for Eli is gentle and caring and accepting of one another. The dialogue is stiff, though to be fair the author explains some of this away with Ash’s age. Ash and Livie’s emotions are instant and intense. Ash proclaims his love immediately and, despite knowing each-other only a collection of hours, Livie accepts and returns it…and everyone hugs a lot. So, based on this alone, I probably wasn’t going to like this book much.

But there is also just weirdness. I am in no way turned on, titillated or attracted to scarlet dog or wolf cock. I’m just saying. But this phrase was used at least four times, which infers that there were at least four incidences in which a wolf (thought to be a large dog) got his (always scarlet for some reason) cock out, in this book. At least one of which was while actually engaged in pre-coitus with a woman. I’m just gonna have to go with EWWWW on that one. Not fun!

But there is also the problem of encountering a “cock” at all. The whole book is a Mary Sue, so encountering crude language like, ‘cock’ or ’empty his ball’ feels out of place in context. It’s as if the author sat down with an eight year old and told him/her about a man getting his cock out to stroke off. It’s just all around wrong. It doesn’t fit the tone of the rest of the book.

I also had a hard time accepting that Ash had lived 3,000 years and never encountered humanity beyond brief observations. Yes, seeing him discover instant fire (a lighter), learn how to button a shirt, what a phone or TV is and such was cute, but ultimately unrealistic (and repetitive). What exactly was he supposed to have been doing for 3,000 years in the midst of an urban setting if he never ventured far enough from his cave to meet people?

I wasn’t a fan of this book. I should have known better than to read a book I can’t even pronounce the title of, but I couldn’t pass up that first line in the synopsis. It really is great.

If I were going to star-rate it I would have given it a full 3/5 stars up until the end. I appreciated the Native American knowledge that went into writing it. I didn’t even dislike the characters, just how they were presented. But the fact that it ended without the big, climactic showdown that it had been building toward from the beginning sank it for me. It’s not quite a cliffhanger, though there is obviously meant to be another book, it just doesn’t feel wrapped up and well-ended.