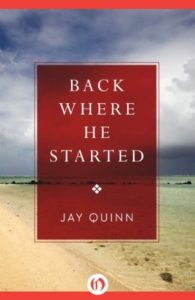 I downloaded a free copy of Back Where He Started from Amazon when it was free. (It was still free at the time of posting.) This was timely as it’s by Jay Quinn and Q was the last letter I had left in my yearly alphabet reading challenge.

Description from Goodreads:
Chris Thayer finds himself packing up the last pieces of a quietly extraordinary life. After twenty-three years of marriage to Zack Ronan—and after raising the widower’s three kids—Chris finds himself facing an uncertain second act. Seeking refuge in North Carolina’s Outer Banks, Chris has to come to terms with his own empty nest and challenge himself to move forward with a new relationship. This is a subtle depiction of the meaning of family and motherhood, and of the search for your true soul.

However, I had some serious complaints that tainted the read for me. First and foremost, I was really disturbed by how many ways this gender binary, fit, gay, male character (who was shown to be an exclusive bottom and physically smaller than every other male) was painted as a woman. Not in the indirect way some readers complain about, when a male character expresses too much emotion and is deemed too feminine, but in explicit ways. The fact that he calls himself a wife, only once saying househusband when speaking to someone he fears will be judgmental. His children call him mom. He calls himself a grandmom when one gets pregnant. (Never once does anyone refer to him as dad or equivalent.) Someone says his pussy will dry up. His ‘breasts’ are fondled in the sex scenes. His boyfriend calls him bitch. He’s compared to the Madonna. He and his ‘high-fag’ friend (his words) speaks of him as ‘girlfriend’ and ‘woman’ and he’s religious, which is generally a female characteristic in literature. If he had claimed any gender flex, I wouldn’t have blinked. But he didn’t, which meant the innumerable ways he’s described as female only made the book feel as if it had been written as M/F and poorly converted to M/M, which I don’t actually think is the case.

I understand that struggling with his identity as a homemaker is part of the plot of the book. In fact, there are some borderline offensive passages that could be read to denigrate wives as unable to be simultaneously married and individual, self-sufficient human beings, but the point is him deciding if he has to be unattached to be whole. But I was still uncomfortable with a lot of it because it felt so overblown and because it compromised the theme that a man just as motherly as a woman. Because according to this narrative, a man can be motherly, but only if he’s also womanly. Plus, it suggests that even among gay men there can only be heteronormative-like partnerships in which one plays the woman.

The writing is mostly very good, though a bit repetitive. But over half the names could be taken out of the dialogue and it would read much more smoothly. They are included far more often than feels natural. Further, the transitions between events are abrupt and jarring. Often there is no indication that time, location or characters are changing from one paragraph to the next, leaving the reader to flounder until they manage to relocate themselves. Lastly, Zach’s attitude goes from hostile and aggressive to contrite off page and it neither feels natural nor satisfying. He was horrible and then was forgiven instantly. The same could be said for the woman who was party to breaking up Chris’ relationship. She is never forced to face the fact that she participated in an affair with an essentially married man with children and with him destroyed another person’s life. She is just treated kindly. I needed to see the people who did wrong face the consequences of their actions and I didn’t feel this was provided.

I also didn’t like the form of Chris and Steve’s relationship. Yes, I understood that all the ‘bitch, make me dinner,’ was half joking and a symptom of Steve’s gruff affection. But I didn’t enjoy reading it. Neither did I feel comfortable with the inference that to marry someone Chris would have to take the subordinate role of wife (or that the wife has to be the subordinate role) and belong to Steve. The author does not seem to have a very broad or forgiving understanding of the role of wife and it was painful to read, regardless of the homemaker’s gender.

In fact, I kind of felt the author didn’t do well with female characters in general. There are only three female characters, none playing a big role. One is a predatory ‘business woman’ who steals another person’s husband. The second is the classic saintly mother trope and the last, and most important one is described as and shown to be neurotic. Not a single one exists outside of her husband, which is notable considering the afore mentioned views towards wives as whole people.

I also thought the book could have ended at 70%, the last 30% only adding unnecessary drama and becoming increasingly saccharine with each passing page. These are content complaints though. I enjoyed the experience and the book in general.