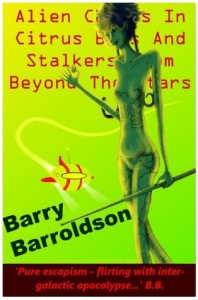 I picked up Alien Chicks in Citrus Bras and Stalkers From Beyond the Stars on the Amazon free list just because it sounded so bizarre. My curiosity was piqued. I read it immediately instead of letting it languish in my kindle like so many other free books because the author/artist was running a contest for a free print of any character for any review posted. I do so love any type of original art. I didn’t get the book finished in time to enter the giveaway, but I’m thrilled to have read the book. It’s a prize in and of itself.

It has one of those annoyingly long descriptions though. Really, why do ebook publisher think that the synopsis of their book no longer needs to fit onto the space of the back of a book? But because it gives such insight into the type of book this is I’ll include it and all of it’s ridiculous length here.

Alien Chicks In Citrus Bras And Stalkers From Beyond The Stars is a Comedy Sci-Fi novel centring around an unlikely love-heptangle and set against the ever-popular backdrop of universal apocalypse. The setting: the seedy underbelly of Venus 15 in a future where Venus has overtaken the Earth as the central hub of the solar system.

The story initially follows the eccentric and nocturnal Gas Chong through a typically bizarre twenty four hours of his life, providing an insight into why he of all people will soon been chosen to combat the chameleonic evil that has extinguished all life in so many universes before. We see glimpses of his alien disguises, opulent luxury and raging paranoia. Chong is trying to assassinate the Mafia boss ‘Mister Rack’ who dropped him on the Planet of The Preying Mantis Women; all the while a secretive, inter-dimensional creature called the ‘Chaos Blossom’ selects him for her pre-apocalyptic nibble, and gets onto his trail. If he had known of her existence and her intentions Chong would have freaked out in the truest sense of the phrase, what with his raging fear of being eaten alive by a woman nurtured deep into his psyche while on the Planet of the Preying Mantis Women. Fortunately Chong remains blissfully unaware of his specific doom. Nevertheless it remains rather cruel of fate that with such an overbearing fear Chong should find himself the focus of so much zealous female attention. Chong finds it hard to maintain a close proximity to a woman without fleeing for his life, but his therapist Dr. Furtleberger believes in stringent behavioural ‘dinner date’ therapy. Furtleberger also frowns upon on artificial crutches such as Chong’s Obelointment sunglasses that can transfrom a beautiful woman into a bricklayer with a hairy crack. Understandably it’s all quite a strain for the C-man.

Runaway Reliffian princess Tangerine Tree tries to enter Chong’s life at a critical point near the very culmination of his Machiavellian plans. Guided by anonymous notes to Venus 15 after years on the run from her laser-axe-wielding father and the might of the Reliffian empire, she encounters villainy, monstrous lizards and wheelie bin-standard accommodation. Years ago, before she ran she had a dream – a vivid dream of a man who would share her destiny. The notes tell her to seek Chong, but until she beholds Chong at the Kazz Bar she does not realise that the man in the notes and the man in the dream are one and the same! Enlightened thusly, Tree firmly believes that Chong can help her escape the known universe though all the signs show the window of opportunity is fast closing. Her father’s bounty hunters are on their way, and many other enraged and misguided factions are closing in them both. Chong, fully absorbed as he is, doesn’t realise that taking care of Rack won’t get him his old life back. So Tree grits her impatient, regal teeth and waits for events to run their course.

Cruel disaster strikes at the Lizard races in the form of an incriminating Kebab shop security video and an unreasonably psychotic Mafia Uber-Lord. Chong finds himself at a dangerous and urgent crossroads and lazering his way through the window seems like the best bet. In mortal peril on the Lizard track below he is delighted to find himself rescued by the lissome waitress he had been fantasizing about since yesterday evening. After a miraculous escape he chooses to accept Tree’s offer to team up despite her infamy which will surely make exiting Venus harder. His surprising agreement may be on account of her saving his life, but it probably has more to do with that teasing connection they shared at their meeting in the Kazz Bar: a connection that Chong believes to have nullified his phobia of women in a sensual way… So as the Mafia rage and the universe burns he takes his first steps along a path towards his reawakened desires for women, or rather his desires for this one uniquely appealing, feisty alien Princess…

Crazy right? To start with, it is just as crazy as the description says. Think Time Bandits meets Red Dwarf, all wrapped in the techno-trope of William Gibson or Neal Stephenson. A decent portion of the book takes place outside of the confines of reality, which means outside of anything predictable. You’re never sure exactly what is going on or what is going to jump out at you next. The characters are unique, to say the least, and their perceptions of themselves and each-other is endlessly amusing.

The real gem here, however, is the writing. It is smooth and conversational, sprinkled liberally with narrator commentary and witty sarcasm. So, even if you don’t know exactly where the plot is going (or even where it ends up), you are certain to enjoy the ride.