You know I love books. I love everything about books. I really do. I have thousands and thousands of them. (Thank you e-readers for making that possible.) But there is a challenge inherent in having so very much of something you love. There are days when I just cant decide what to read. I spend more time scrolling through my To-Read list than I do reading whatever I eventually pick out.

And given this difficulty, sometime I’ll take any little nudge toward a book I can get. So, when my daughter came out of her bedroom recently in a new T-shirt her Nana sent her and I thought, “That looks oddly familiar. I’m sure I have that book,” a decision was made. 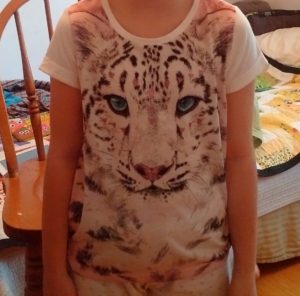 Here, have a look. Tell me I’m wrong. I mean, I know it’s not exact. But close enough for jazz, right? 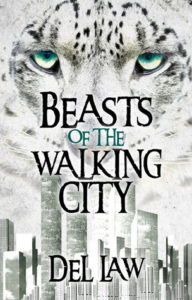 Anyhow, I picked up Beasts of the Walking City, by Del Law from Amazon when it was free. It’s been sitting on my Kindle for ages. Sometimes it takes an injection of randomness to bring something to the fore.

Description from Goodreads:
It’s not easy being a color-shifting, bourbon-loving Beast, even when you can travel between your own world and Earth’s past. Even when you’re working for the gangster Al Capone.

Now, Blackwell is on a one-way trip into the ruins of a flying city to steal an ancient craft from one of his world’s biggest gangster families—a family you just don’t want to cross. But the ship is just the beginning, and Blackwell isn’t prepared for everything that comes next. First, he’s hunted by a cult who wants to wipe his race out for good. Then, he’s a pawn stuck between powerful gangster families at each other’s throats. Who can he trust? There’s the beautiful and seductive double-agent named Mircada who will steal his heart? A huge fire-belching family kingpin named Nadrune who wants him for her pet? The mysterious woman Kjat, who loves him—and who’s filling up with crazy demons from another world? The crazed general who’s after him for revenge? (Not him, at least that’s pretty clear.) Then there’s the mystery of a legendary flower that once belonged to his race, a flower that might change the world—if only he can find it.

Review:
Hmmm, so-so; more good than bad, but not stellar. I generally liked this story. The bulk of the writing is fine. I certainly liked the idea and I think the characters. But it’s that, “I think” that is the problem. The author somehow managed to write a (mostly) first person, present tense book and still allow me to finish it feeling like I didn’t know the characters well. How is that even possible?

I say mostly because there are a lot of slip ups where the author dropped into third person or past tense writing instead of first person, present tense; sometime hitting all the variations in one sentence. There were also other copy-editing mistakes. The editing needed quite a bit more work.

I also thought the book felt overly long and I wasn’t always certain what was happening at any given moment. Plus, the whole inclusion of earth and earth items/people was awkward, distracting and not particularly well integrated into the story as a whole.

I’d read another book by Law, but this one felt a bit disjointed and cobbled together on the whole.