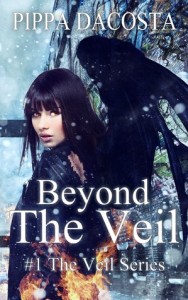 Author, Pippa Dacosta sent me a paperback copy of her newest novel, Beyond the Veil.

Description from Goodreads:
“They say I’m half demon, but I like to think of myself as half human, especially as the demons want me dead.”

Charlie Henderson is living a lie. Her real name is Muse and her attempt at a normal life is about to go up in smoke.

When a half-demon assassin walks into her life, leaving a trail of destruction in his wake, Muse must return to the one man she hoped never to see again and ask for help. The Prince of Greed isn’t known for his charity. The price is high, but the cost could tear her apart.

Trapped between the malevolent intentions of a Prince of Hell, an assassin with ulterior motives, and all of demon-kind, Muse must embrace the lure of chaos at her core; the demon inside her, in order to survive.

When your ex is the Prince of Greed, you’d better be ready to raise hell.

Review:
If I was inclined to use stars on this blog, I would call this a solid 3, maybe a 3.5. It was a pleasant distraction. I enjoyed reading it, but it left me wanting in a lot of aspects.

First, there is very little character development. The book jumps right into the action. While this is fun, it didn’t give me any time to get to know Muse or anyone else. Plus, a lot of Muse’s history is referenced as the book progresses. I mean, like, a whole book’s worth is hinted at—major drama. This left me feeling like I couldn’t possibly be reading the first book in the series or that this is actually the first in a spin off series. It isn’t, as far as I know, but it sure felt like it. So much is skimmed over or the reader is just told it happened. I was duly informed that Muse had a tragic past, but that wasn’t enough to make me feel for her or that history.

This was all complicated by her tendency to have whiplash changes of opinion with no evidence of an impetus of change. As an example, she spent much of the beginning of the book telling herself she can’t/won’t go back to Akil, that he’s dangerous and she has to keep her distance because he can get under skin easily. She’s very adamant about this. Then he shows up and says, ‘come to a party with me’ and she not only goes, she tells herself she deserves to have fun and relax. It was a very abrupt change of attitude toward him and nothing seemed to have happened to give her a reason to suddenly be less wary around him.

The same tendency toward thinness could be claimed for the world building. There isn’t much. We’re told demon’s exist and live on the other side of a ‘veil,’ that’s about it. I’m assuming the universe is otherwise the same as ours, but I don’t know. Nor do I know the time frame. It could be years in the future or today. I’m not sure.

I also thought the sex was out of place. It wasn’t at all graphic. It just popped up regularly, at inopportune moments. It left me feeling like Muse had no control over herself. It didn’t matter whom she was with, she was lusting after him. As she’s a woman with a history of slavery, including sexual slavery, I developed the, surely erroneous, impression that her body responded to any powerful man available with no regard for her own wishes. I’m afraid she felt a little like a whore in this respect (and I’ve purposefully used the more inflammatory word here), as if she was so accustomed to servicing men that she did it without conscious effort or even apparent knowledge that she was following an established pattern. I’m fairly sure this wasn’t the author’s intent, but it’s still the impression I garnered.

Lastly, it had a bit of a deus ex machina ending (pet peeve, grrr) and a lot of important information was skipped over between the final chapter and the epilogue. I needed more details to believe it…actually that’s true of the whole book, but especially the ending.

All-in-all, the author has a really interesting idea here. A lot could be made out of Muse’s slavery, subsequent strengths and appreciation of the mundane. But I think the book felt rushed. Too much was only sketched out or simply leapt over. I was never able to get enough of a feel for the characters to understand their motives and actions, leaving everything feeling random and unpredictable.

It is well written and, other than a few missing words, well edited. Plus, (and I know this is a strange thing to mention) I like the size of the book. At 8×5 inches it’s bigger than a mass market paperback, but not as big as the ~9×6 I’ve come to associate with self-published books. While it wasn’t a faultless read it’s worth picking up. As I said, I had complaints but I also enjoyed the ride.