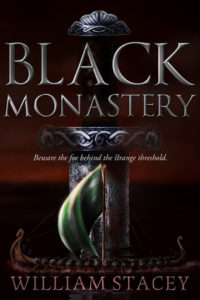 Author, William Stacey, sent me a copy of his novel, Black Monastery.

Description from Goodreads:
In 799 A.D. Viking warband leader Asgrim Wood-Nose sails his prized longship Sea Eel south along the coast of Frankia to raid the island of Noirmoutier—the Black Monastery.

Banned from his homeland following a night of rage-filled murder, Asgrim has been declared outlaw. Unless he can raise a princely blood debt, he will never see Denmark again. When a Saracen merchant brags of a great treasure hidden deep within the monastery, Asgrim realizes fate is offering him a chance to go home again. But Asgrim has led his men into a trap: somehow, the monks of the Black Monastery have released a dark supernatural force, an eastern demon that wears the skins of its victims. Hunted by this monstrous evil and tormented by the ghosts of those he has slain, Asgrim’s only ally becomes another lonely soul, a Frankish woman abandoned by her people under suspicion of witchcraft.

The Viking north clashes with the supernatural east in an epic historical fantasy tale of heroism and redemption in the face of unimaginable horror.

Review:
This was an enjoyable enough read once you got past the How To Build a Long Boat lesson in the beginning. I enjoyed the complexity of the main character, in that he is not a nice man. Neither are any of his men. They’re a Sword-Danes, Vikings. Murder, rape and pillage is the name of the game. But we’re given enough of a glimpse of Asgrim’s beginnings to know that he could have, in other circumstances, been a kind person. The fact that he isn’t makes him hard to relate to and empathize with, however.

The villain is truly horrific and you feel the tension it creates. However, he’s defeated in a bit of a Deus ex Machina move. There’s a bit of a sex-equals-love romance element that I didn’t feel was well developed. I found the writing repetitive, though clear and easy to read. All in all, I consider it worth the read.