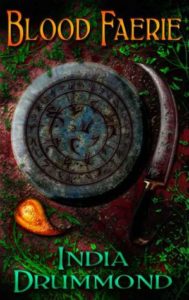 I’m three days away from having owned India Drummond‘s Blood Faerie for four years. It took me that long to get around to reading it. It’s a perma-freebie on Amazon.

Description from Goodreads:
Sentenced to death, Eilidh ran—away from faerie lands, to the streets of Perth, Scotland. Just as she has grown accustomed to exile, local police discover a mutilated body outside the abandoned church where she lives. Recognising the murder as the work of one of her own kind, Eilidh must choose: flee, or learn to tap into the forbidden magic that cost her everything.

Review:
This ok as a quick evening read, but it wasn’t amazing. It had an interesting story idea and the writing was pretty good, but nothing felt particularly developed and I thought the evil was defeated far too easily, allowing for a pat happy ending. Essentially, I thought it started out well and grew progressively weaker as the story progressed.

More specifically, I didn’t think the characters were particularly well developed, the men especially. I thought Munro’s sudden love and dedication felt unfounded and out of nowhere (or magically manipulated). Saor was a bitter cardboard cutout that was conveniently disposed of by the author when he was no longer needed, and the bad guy (I’m not even gonna try with his elvish name) was bad just because he was bad, no depth greyscale to him at all. I did like Eilidh a lot, but thought that after 25 years in the human world her innocence and lack of knowledge about modern amenities and human customs was unbelievable and obviously played for laughs and weak sexual tension.

But like I said, as a quick read it’s entertaining enough, even with these detractions. I’d read more of Drummond’s writing.