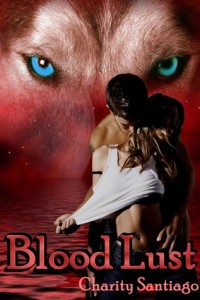 In April of 2013, I downloaded Blood Lust (by Charity Santiago) from the Amazon free list. Reading it now means that it just misses out on qualifying for my TBR challenge of reading books I’ve had 2+ years. But it does qualify for my Blood Lust challenge, in which I’m reading four books with that same title.

Description from Goodreads:
Eve came to Rapid City to escape her parents’ messy divorce, but what she finds in South Dakota exceeds her wildest dreams- and nightmares. After Eve is attacked by a wolf outside her grandmother’s house, she stumbles into a new and frightening existence as an alpha werewolf. Fated to lead the pack and obligated to choose a beta to lead beside her, Eve still cannot bring herself to forget Jericho, the mysterious vampire who saved her life. Will the wolves force Eve to choose between her destiny and her soulmate?

Review:
Meh, it was OK. For those of the Twilight fandom it will probably be a big winner. Eve is one of a bagazillion just barely 18-year-old, special girls who somehow develop more power/skill/status/etc than anyone else and wields it with comparative ease. Meh. If that’s your thing, this will be a great book for you. It’s not really my thing.

The writing was fine. I didn’t notice anything worth note about the editing, so it must have been fine. The plot hangs together, though it’s fairly predictable. It is however a cliffie and not even a happy one.

All in all, I’ll call it a good read for the right YA reader. I don’t feel any driving need to continue the series, however. I’d grab the sequel as a freebie, but probably not buy it.