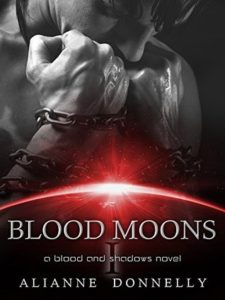 I picked up a copy of Blood Moons, by Alianne Donnelly, from Amazon when it was free. I read it as the first in my Blood Moon Reading Challenge.

Description from Goodreads:
They say no good deed ever goes unpunished, a sentiment Dara understands fully now that she is paying for a crime she didn’t commit. It was stupid to call in a murder she didn’t really see. But how could Dara have kept silent? Now a stunning—scratch that, a dangerous—man with a frightening secret of his own is telling her he can help. Yeah, right. A telepath knows better than to trust mere words.

The last decade of Tristan’s life has been penance. All that time spent among the worst dregs of society might have made him begin to question his humanity, but he’s never felt so much like an animal as he does around this timid, delicate female. Her very presence stirs the beast within him; Tristan can feel it growing stronger every day. Any more time with Dara, and it might overpower him completely. But without her, he stands no chance at all…

Review:
I had problems with this book. It wasn’t the writing. That was fine. It wasn’t the idea behind the plot. That was fine. It wasn’t the dialogue. That too was fine. It was the fact that the first third is basically just ‘let’s protect the fragile heroine from being raped in this unbelievably vile, but oddly sterile prison with a gender ration of 4 women to 200 evil, evil men that the reader never sees or feels the threat of’ and the last two-thirds rambles on and on forever. This book needed an editor. Not for typos and grammar mistakes, I never noticed any, but for someone to tell the author to cut a third of the length and tighten the plot a lot.

I also thought the characters, Dara especially, were very shallow and did things that were not only too stupid to believe, but often out of character. Like volunteering for maximum security prison with the most violent offenders (because you usually get to choose your level, apparently) despite being innocent and as fragile as glass or leaving the person you are so protective of that you literally guard her from passer-bys on the street alone when there have been legitimate threats against her.

Close, but no cigar for me.