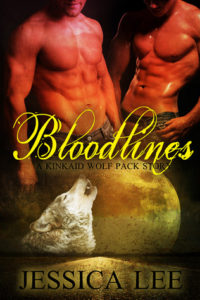 I picked up a copy of Bloodlines, by Jessica Lee, when it was free on Amazon. It was still free at the time of posting.

Description from Goodreads:
Evin KinKaid, the only son of the KinKaid pack’s alpha, has a secret. One that will tear his family apart. In one year, Evin is to succeed his father as alpha leader and continue the dominant bloodline of his family. There’s only one problem: Evin is gay. When Evin is pushed into the bed of his intended female mate, he’s forced to reveal the truth. And for an alpha male wolf shifter promised to a female whose goal is to one day be queen, coming out has never been more explosive.

To Mason Thorne II, heir to Thorne Global Inc., life is a lie. To sustain his father’s love, Mason has agreed to stay in the family business and to one day assume his place as CEO. Instead of reaching for his heart’s desire, he’s settled for a life he never wanted. But an unexpected auto accident will send Evin and Mason into each other’s arms and down a path toward a destiny neither man can escape: an eternity sealed in blood.

Review:
This was ok, not great, deep or important in any way, but also not all bad. It was basically 75% sex though. Which was a shame because that left far too little room for the plot, which was weak to say the least. I rather thought it just a pretty skin laid over the sex to tie it all together. Meh.

The main characters, while likable, were shallow and poorly developed. Everyone else were just caricatures, blown up and over exaggerated villains or angels. Mostly including cheesy dialogue to match their role. Meh.

The writing, when not dripping cheese, was fine. But the editing was a mess. Meh.